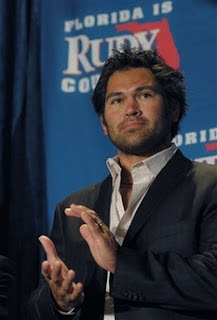 Realguy Yankees outfielder Johnny Damon is a Rudy fan. Damon has been campaigning with Rudy in Florida (along with actor Jon Voight and former FBI Director Louis Freeh). Giving the GOP a badly-needed jolt of glammah, Rudy has been injecting star quality into his campaign appearances. And yesterday Rudy even took a spin in a pace car at Daytona.
Then there's this: Jonathan Martin reports at Politico "McCain made clear today that he's opposed to a national catastrophic insurance fund -- something that [Fla.] Gov. Charlie Crist has pushed for his hurricane-ravaged state. It's a key local issue that Rudy has seized upon in both ads and in his stump speech, and you can be sure he and his campaign will now highlight McCain's opposition. It also may, as the Miami Herald's Beth Reinhard alludes to, dim whatever chance McCain had to score Crist's last-minute endorsement."
Posted by Dan Cirucci at 8:32 AM