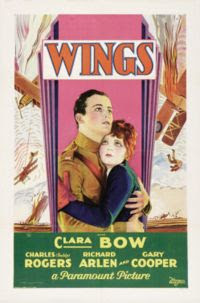 Turner Classic Movies has begun its 31 Days of Oscar and that means only Oscar-nominated movies from years gone by over the next month.
It's a marvelous celebration for movie buffs and last night featured two golden silents: 1927's Wings starring Clara Bow and Buddy Rogers and directed by William Wellman; and 1927's Sunrise starring Janet Gaynor.
I saw Sunrise once before so I opted for Wings, the first film ever to win a "best picture" Oscar. This is a masterful film about World War I which contains some of the most vivid and poignant images you will ever see. It also includes some of the screen's earliest flying sequences. And it's worth a look if only for the movie debut of Gary Cooper who plays a flying ace who is introduced and then quickly lost in a plane crash. But even in this brief scene the tall, laconic Cooper stands out. Cooper's whole career proved that words don't make the star, images do.
Watching Clara Bow in this film I was reminded of the song "With One Look" from Lloyd Webber's Sunset Boulevard:
With one smile
I'm the girl next door
Or the love that you've hungered for
When I speak it's with my soul
I can play any role
No words can tell
The stories my eyes tell
Watch me when I frown
You can't write that down
You know I'm right
It's there in black and white
When I look your way
You'll hear what I say.
Yes, with one look
I put words to shame
Just one look
Sets the screen aflame
Silent music starts to play
One tear from my eye
Makes the whole world cry.
Posted by Dan Cirucci at 9:32 AM