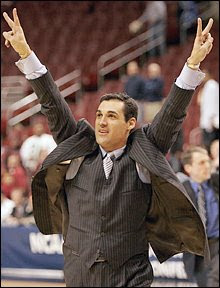 I've been meaning to say something about Villanova's classy basketball coach Jay Wright.
Last week Nova lost a heartbreaker to Georgetown when the ref called a foul on the Wildcats with one tenth of a second to go in the game. One tenth of a second! Georgetown won 55-53 on free throws. To make matters worse, this marked the second time this season that Villanova lost a game on free throws with less than a second to play.
But after the game Wright refused to blame anybody. There was no rancor, no ouburst at the ref, no recrimination. Wright called the whole thing "a learning lesson for these kids" and noted that life isn't perfect, people aren't perfect and sometime's it's hard to learn that.
The Philadelphia Inquirer said that Wright displayed "a silver lining" after the game:
"I was proud of our guys," Wright said. "No moral victories or anything. It's not. It's a loss. But we played better tonight, and I just think we're learning . . . I thought we played good defense," Wright said. "If you're a good team, there are going to be nights when you don't makes shots and you've got to win it with your defense. We haven't been able to do that all year. That's what Georgetown has done all year. They still found a way to win the game."
Jay Wright epitomizes the class and tradition of Villanova. And it reminds me of something that the great Joe Paterno always says: "I'm a teacher, first." Wright understands Paterno's mantra. He gets it. He makes me proud to say: "Hell, yeah . . . I'm a Wildcat!"
Posted by Dan Cirucci at 9:08 AM