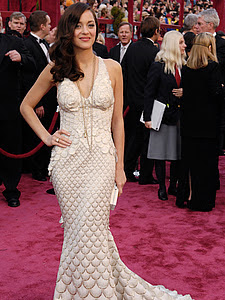 Only last week we were commenting about Michael Medved's observation that "Hollywood Hates America" (also the title of Medved's best-selling book.
And now all four major actor Oscars have been awarded to foreign actors. We're told that this is the first time in the history of the awards that this has ever happened.
Does anybody at all know Marion Cotillard (pictured), the best actress winner? Has anybody ever heard of her? And what about Tilda Swinton, the best supporting actress winner . . . ever heard of her? I guess it's now too much to expect that the winners in major categories would be actors that we've actually heard of, people we've actually seen in movies.
It sort of reminds me of Gloria Swanson's great line in Sunset Boulevard: "I'm as as big as ever. It's the pictures that got small."
I also love the way presenters now have to say "And the Oscar goes to," instead of "And the winner is . . ." It's gotten so bad you can't call anyone a winner anymore because that implies that others are losers. So, if you win the Oscar it simply "goes to" you. It might just as well have gone to someone else, but this time it "went to" you. How nice. It's all so politically correct.
Not that Oscar has lately worried about being politically INcorrect - especially when it comes to the GOP. The show wasn't on for ten minutes last night before the droll and boring host Jon Stewart started lambasting McCain on the issue of age. He then when on to ask the entire audience: "So, which Democrat are you voting for?"
So much for correctness. So much for class.
Posted by Dan Cirucci at 9:09 AM