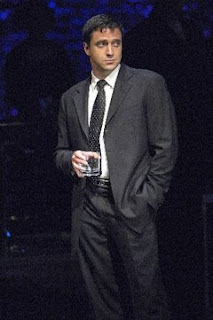 Last night I tuned into the two-hour-plus telecast of Stephen Sondheim's trailblazing musical "Company" which was revived last year on Broadway. This minimalist, actors-play-the-musical-instruments version stars the droopy-eyed Raul Esparza in the pivotal role of Bobby.
"Company" is one of my all-time favorite shows and I suppose I'm somewhat possessive about it.
Since I saw the orginal version with Larry Kert, Donna McKechnie and Elaine Stritch decades ago on Broadway, I'm particularly wary of any revival that comes along. Nonetheles, a few years back I did see a credible revival at the Kenndy Center in Washington.
Still, it's hard to top the audacity of the original with its sleek staging, strategic lighting, seamless ensemble performances and that unforgettable Boris Aronson set.
Maybe I should have seen this latest revival live but I had to settle for last night's TV/film version.
I was disappointed.
This acclaimed update directed by John Doyle is dark and heavy. All of the actors wear the same black suits or dresses throughout the perfromance. There are no props (save for the actors' musical instruments) to speak of. The lighting is, to say the least, subdued. The entire production maintains a hard edge. It's as if "Company" stumbled through the last decades of the 20th century and took all of the trash of the 70s, 80s and 90s along with it. And so the show seems to have become weary -- harder, tougher, more shrill and less forgiving. There's a dejected feeling about it.
And although Raul Esparza has a beautiful voice he's simply not the Bobby I've known all these years. He's more aloof, less charming, more brooding, less fun - more Robert than Bobby.
The one bright spot is Heather Laws as the neurotic Amy, who sings the extraordinary, rapid-fire "Not Getting Married Today." Just for that one moment Laws made me remember why I loved (and still love) the original "Company" so much.
Posted by Dan Cirucci at 4:06 PM