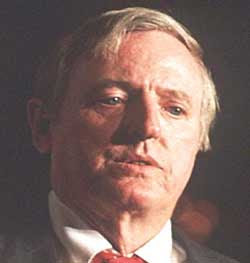 As the father of the modern conservative movement in America William F. Buckley did more to advance the positive values of individual liberty, decency and simple common sense than anyone of his generation. He was more than a great thinker and communicator. He was also a consummate liver of life - a passionate man who was fully engaged; someone who showed us that an American could, indeed be a Renaissance man. Though his scholarly language often challenged us, the thoughts behind his words were rooted in the most basic American notions and virtues. He mainstreamed conservatism and made it meaningful and accessible to everyone. And, he showed us how to live an honorable life. He took to heart the words of Oliver Wendell Holmes: "A man should share in the action and the passion of his times at the cost of being judged not to have lived." He lived.