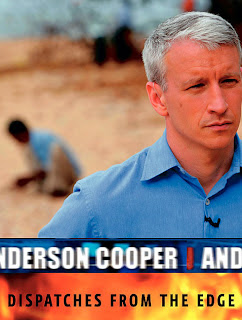 I've just finished reading Anderson Cooper's Dispatches From The Edge which is subtitled "A Memoir Of War, Disasters and Survival."
The book jumps back and forth between Cooper's stories of his own life and his coverage of the world's hot spots including Sri Lanka, Iraq, Sarajevo, Somalia, Rwanda and New Orleans in the aftermath of Katrina. At 42, this boyish-looking CNN News anchor and heir to the Vanderbilt fortune has seen a lot of life -- from the untimely death of his father Wyatt Cooper, to his brother's tragic and dramatic suicide to his own brushes with death in war zones.
Cooper writes in a short, quick stacatto style. Here's how he describes images of his time in Africa: "Amputations. Executions. Empty beds. Shuttered stores. Crippled kids. Wild-eyesd gunmen. Stripped-down corpses. Crashed cars. Mass graves. Hand-made tombstones. Scattered ammo. Half-starved dogs. Sniper warnings posted like billboards . . . Desert. Mountain. Rice paddy. Field. Farmers bent over . . ."
There's a breathless quality to Cooper's writing. What comes through is a restlessness tinged with sadness. But on the air Cooper seems calm, detached, super-cool. You wonder about his prematurely gray hair, his quizzical squint and the way he purses his lips. You watch and listen and you want him to smile more, to seem more at ease.
Here's an observation from the book that's worth repeating: "In disasters, in war, it isn't government that helps people, at least not early on. It's individuals: policemen, doctors, stgangers, people who stand up when others sit down."