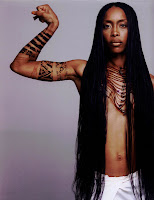 From The Dallas Morning News:

Erykah Badu appears naked in her new music video, but what people are talking about is the background scenery.

In the five-and-a-half minute video – which instantly went viral Monday on YouTube – the Dallas-born entertainer strips down with Dealey Plaza as a backdrop.

At the edited-in sound of a rifle shot, she falls to the ground with a jerk, within feet of where President John F. Kennedy was shot.

"I don't understand how someone who lives here, who is a resident of this city, could do such a thing," said Lindalyn Adams, a longtime civic volunteer who is credited with rescuing Dealey Plaza from neglect and exploitation in the 1980s. John Crawford, president of the nonprofit Downtown Dallas, added: "It's in poor taste and poor judgment, in my opinion."

Badu said in an interview Monday that the video for "Window Seat" was a "protest" and "about liberating yourself."