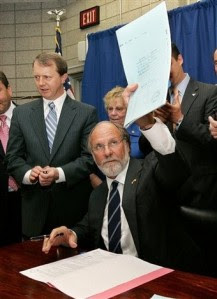 NJ3 congressional candidate Jon Runyan went on the attack yesterday after John Adler issued a press release “decrying the fiscal mess and property tax crush in New Jersey that Adler himself created during his 16 years in Trenton as a powerful State Senator.”

Said Runyan in his own press release issued Wednesday:

“John Adler didn’t bother to address the property tax crisis in New Jersey during his 16 years in Trenton, but now he’s going to fix it from Washington?, What a joke! This shameless hypocrisy on the part of Congressman Adler is frankly why everyday taxpayers can’t stand career politicians who constantly talk out of both sides of their mouth. The sheer nerve it takes to even make an announcement like this with a straight face is stunning.

John Adler voted in favor of every, single tax, spend and borrow State Budget put in front of him by Jim McGreevey and Jon Corzine . The same state budgets that made this state unaffordable for residents, drove jobs out of state, gave us one of the worst climates for business in the country and pushed state government to the brink of bankruptcy. No poll-tested, election-year proposal, that he has no intention of implementing, is going to change these facts.”

The release adds that “in just his final six years in Trenton, Adler voted to raise taxes 43 times, while increasing state spending by $11 billion—a 50% increase.”