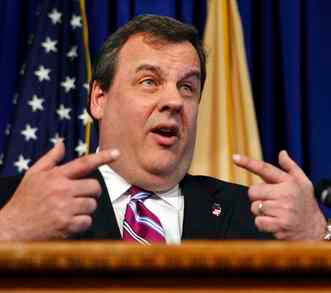 New Jersey Governor Chris Christie knows he's not the most photogenic person in the world.
In fact, the Governor has often told the voters of the Garden State: "I know you didn't elect me for my charm or my matinee idol looks."
But even Christie thinks he may be just a tad better looking than the photo of him (above) that appeared in yesterday's Philadelphia Inquirer. The photo was part of a story chronicling the Governor's first 100 days in office.
"Did you see that photo in the Inquirer yesterday?" Christie asked a capacity crowd of South Jersey business people at today's Chamber of Commerce luncheon in Voorhees.
"Where did they find that photo? I mean, was that the worst picture ever?"
The Governor said he took the newspaper home and showed it to his wife and four children.
The audience chuckled as Christie told the story of their family's astonishment at the newspaper's choice.
"My daughter said 'Dad, that's the worst picture of you ever.' And then she added: 'And there have been a lot of bad pictures of you.'"
Half jokingly Christie said he's thinking of having a chat with the new owners of the paper which was recently sold to a lender's group as part of a bankruptcy sale.
Posted by Dan Cirucci at 4:29 PM