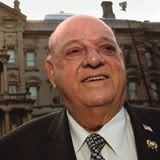 New Jersey Assemblyman Joseph Azzolina, a USN Retired Captain who served in the State Senate and General Assembly representing New Jersey’s 13th district passed away yesterday evening at Saint Vincent’s Hospital in New York with his sons Joseph, John and Gregg at his bedside. He was 84.
New Jersey Governor Chris Christie said: "“Mary Pat and I were deeply saddened to learn of the passing of Joe Azzolina late yesterday. A veteran, businessman, father and husband, Joe was also a friend and dedicated public servant who will be greatly missed. Our prayers are with the Azzolina family today.”
Azzolina was first elected to the State Assembly in 1965, and re-elected in 1967 and 1969. He was elected to the State Senate in 1971. After losing his bid for a second term in 1973, Azzolina returned to the Assembly in 1985. After unsuccessful State Senate and Congressional runs in the late 1980s, Azzolina was elected for a third tenure in the State Assembly in 1991, where he stayed until 2005. Azzolina, a Middletown resident, succeeded in business, government, and military service. A self-made entrepreneur, building upon the business principles he learned at the small corner grocery store opened by his Italian immigrant parents John and Angelina in 1927. He was the founder of Food Circus Supermarkets, Inc. operating 10 SuperFoodtown stores in Monmouth, Ocean and Middlesex Counties.

As a retired U.S. Naval Captain, Azzolina’s military career was vast and distinguished. He enlisted as an apprentice seaman at the age of 18 and attained the rank of Captain in 1978; he officially retired in 1986. During his 42 years of service in Navy and the Navy Ready Reserves, Azzolina served on active duty aboard the cruisers USS Albany, USS Portsmouth, USS Toledo and the USS New Jersey. Azzolina served as Chairman of the state’s USS NJ Battleship Commission, and has been credited for preserving the most decorated warship in U.S. history as a museum and memorial. He also attended the National and Naval War Colleges and served at the Naval Earle Weapons Station in Colts Neck and Leonardo Pier.