Stella Pizza And Parc On Rittenhouse 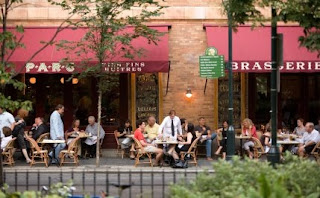 During our recent visits to center city Philadelphia we had a chance to visit two popular restaurants that are part of the Starr Restaurant Group.

The first was the big, sprawling French-inspired Parc on Rittenhouse Square.
We made reservations for Parc on a Saturday night and arrived with another couple. We knew it would be crowded, and it was. It was teeming with diners.
But our reservation was honored promptly, without a hitch.
When we made the reservation we asked to sit at a table by a window, preferably overlooking the Square. Once again, we were perfectly accommodated.
It was a beautiful spring evening and our view of the Square showcased flowering trees, shrubs and tulips along with the bright, beguiling first greens of the season.
The service at Parc was seamless. The meal was perfectly paced. The decor seems so authentic, down to the last detail that you would actually think you were in a brasserie in Paris.
People had warned us that this place would be loud. Well, it wasn't quiet but our conversation wasn't in the least bit affected by the cacophony of sounds around us. It was fine.
Everyone at Parc is so attentive and so anxious to please. In fact, the restaurant manager actually came to our table several times to make sure everything was fine. Not only did we have no complaints but we gave him nothing but raves.
Do I have to say that the food was out-of-this-world wonderful? Do I?
Well, it was. Spinach ravioli. Escargots. Strip steak. Pommes frites. Trout amandine. Roasted salmon. All absolutely wonderful. And for dessert: A dreamy apple tarte tatin with vanilla ice cream.
Every dish was memorable.
And -- best of all -- no rush and no hurry. We were given plenty of time to savor every portion of the evening, including our martinis and our coffee.
As far as we're concerned, Parc is the jewel in the crown of Stephen Starr's culinary empire.
C'est magnifique!

Less than a week later we found ourselves at Pizzeria Stella in Old City.
Stella produces fresh, classic, thin-crusted, personal pizzas (12 inches in diameter) as part of a limited menu. The restaurant sits on an attractive corner near Headhouse Square.
The place is simple inside, a combination of country Italian with modern touches.
If you go, you'll want to arrive early and try to get a window table facing the Headhouse area which is very much like a piazza. Or, weather permitting, you may want to sit outside.
House wines are excellent and are served in Libby ("Made in the USA") half tumblers. It's almost as if your Italian immigrant grandpa made the wine himself and poured it into a simple kitchen glass just for you.
The red pizza sauce is slightly sweet and the mozzarella is light -- slices dabbed strategically on the margherita pizza. The white pizza features several varieties of cheese and the aroma of fresh olive oil permeates the pies. The crust is more chewy than crispy but appealing nonetheless.
Actually, the pizza at Stella is very similar to the pizza at Lamberti's Tutti Toscani on Brace Road in nearby Cherry Hill. But here's the deal: the Lamberti pie is actually better. It's crispier and not as oily. And the Lamberti pie is a better bargain.
But the Stella pizza still sets a new standard for center city Philadelphia. And, Stella is cozy and inviting.
Posted by Dan Cirucci at 9:27 AM