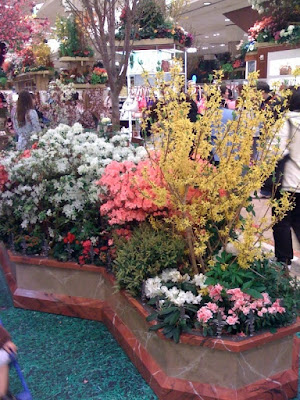 Photo by Mark Tarasiewicz.
Over the weekend we made a quick trip to Manhattan where we enjoyed the spectacular Macy's Flower Show at Herald Square (see photo above), the art collection of the late author Michael Crichton on display at Christie's, brunch at Pazza Notte, cupcakes at Magnolia Bakery, Michael Feinstein and Dame Edna on Broadway in All About Me, cocktails at the chic W Hotel bar on Times Square and dinner at the Bryant Park Grill.
We had a wonderful time.
Of course, you don't have to go to New York to see Macy's Flower Show. It's also on view in Macy's Philadelphia in the Grand Court and at several other Macy's stores in various parts of the country.
But the show at the NYC flagship store is still the biggest and the best. It continues for another week.
The Crichton collection at Christie's Rockefeller Center was hugely impressive and free: Jasper Johns, Andy Warhol, Picasso, Claus Oldenberg and more. It will all be auctioned off so, if you intend to see it, you'd better hurry!
Pazza Notte on Sixth Avenue was a quick discovery where we savored a complete brunch (omelets, home fries, salad, coffee) for ten bucks per person and everything was great: super banquette with a view, fresh linens, delicious food, prompt, efficient service.
Magnolia Bakery continues to serve up some of the best cupcakes in the world. What more can we say?
Dame Edna was irreverent, raucous and hilarious while Michael Feinstein was gloriously smooth, suave and melodic as he surveyed the Great American Songbook. Together, Edna and Michael gave us a hugely entertaining afternoon. But you can't see the show because it has already closed. That's Broadway's loss.
The bar at the W Hotel on Times Square is the place to see and be seen. Our lemondrop martinis were perfect for an unseasonably warm day: fresh, bracing, delightful.
And then the Bryant Park Grill. Well, Bryant Park was clean, bright and marvelously green with the fresh aura of spring. And the grill is a large glass box so everyone has a great view of the park. Our reservation was honored precisely on time. Our dishes (mostly varieties of grilled fish) were inventive, plentiful and pleasing to the palate. The rolls were crisp, the appetizers and sides were wonderfully harmonious, the coffee was hot and strong and the service was seamless.
As we headed back to Philadelphia, we had that same feeling once again: so much New York, so little time!
Posted by Dan Cirucci at 6:05 AM