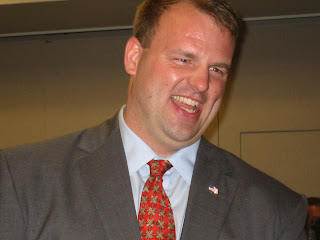 The National Republican Congressional Committee (NRCC) has officially announced Jon Runyan (NJ-03) as an ‘On the Radar’ candidate, an important first step in its Young Guns program.
Founded in the 2007-2008 election cycle by Reps. Eric Cantor (R-VA), Kevin McCarthy (R-CA), and Paul Ryan (R-WI), the Young Guns program is a member-driven organization dedicated to electing open-seat and challenger candidates nationwide.
Runyan is running in New Jersey’s Third Congressional District, a seat that is currently held by Democrat incumbent John Adler, an out-of-touch career politician who is more concerned with toeing his party line than serving the constituents he was elected to represent.
The Young Guns program is designed to assist Republican candidates for the U.S. House of Representatives in accomplishing goals and benchmarks throughout the election cycle focused on the fundamentals of a winning campaign. By reaching ‘On the Radar’ status, Runyan has already proven his ability to build a successful campaign structure and achieve important fundraising goals.

“The NRCC is committed to working with Jon Runyan as he continues to meet the rigorous goals of the Young Guns program,” said NRCC Chairman Pete Sessions. “Jon is an accomplished and conservative leader, who will fight to create jobs and rein in government spending. I am confident that Republicans will be successful in our run against John Adler, a loyal Democrat who has repeatedly put his partisan agenda before a healthy economy.”

Runyan is an accomplished leader both on and off the football field who brings tenacity and dedication to all of his endeavors.
Whether it’s leading his football team to a Super Bowl appearance as a Pro-Bowl offensive tackle, volunteering, or studying Entrepreneurial Management at the prestigious University of Pennsylvania’ Wharton School of Business, Runyan’s work ethic has always led him to victory. In addition to his exploits on the football field, Runyan is also an on-air analyst and personality for various radio and TV stations. He is an avid and passionate volunteer, helping with countless charities and serving as a Board Member for the Alzheimer’s Association of the Delaware Valley and a five-time host of his own “Score for the Cure” Golf Tournament benefiting prostate cancer research in New Jersey.
Having achieved certain benchmarks to place him on the road to victory, Jon Runyan now faces a new set of rigorous goals that will help him advance to the next level of the Young Guns program and help him build a competitive, effective and winning campaign.
Posted by Dan Cirucci at 8:25 AM