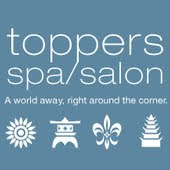 A few weeks ago I decided to celebrate my birthday with some spa services. Living in Center City made Toppers Spa/Salon right off Rittenhouse Square the obvious choice. I had heard many great reviews of Toppers from friends and family but had not been there in many years. I had actually scheduled a massage at the same facility earlier this year only to have it abruptly canceled an hour beforehand due to overbooking. But I decided to give the spa another chance since the cancellation occurred in the midst of the understandably busy holiday season. So, armed with aching muscles and chipped nails I scheduled a hot stone massage, manicure and pedicure.

I arrived at Toppers shortly before my 9:00 am appointment and found the staff rushing to report for work. A group of women was already waiting for haircuts in the salon area and one person was working the check-in desk. The atmosphere was generally rushed and disorganized. I waited behind someone else in line and once checked-in heard a faceless voice yell from the back office that I should take the elevator to the second floor. This was an apt precursor to the day. Below for your spa-going pleasure is the Cliffs Notes version of my experience at Toppers:
What do you think? Have you been to Toppers? Have you had a different experience? Is there another great Philly spa that I should try? Am I right, wrong, or should I just be happy to get a dang massage anyway it comes and get over it! Let me know!
Posted by Aimee at 2:25 PM