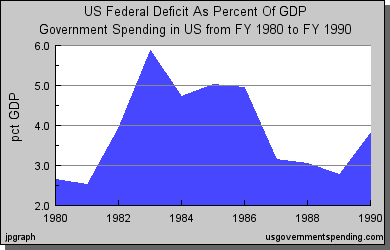 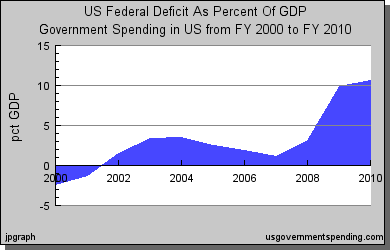 The best way to measure the federal deficit is as a percentage of the gross domestic product.
This measures the deficit against our overall economic output. In this way we can see the true burden of the deficit on our economy.
The official figures above are provided by usgovernmenmentspending.com.
The first graph shows the deficit mostly during the Reagan years from 1980 to 1990.
These are often cited as high deficit years by the Democrats.
So, when you criticize the deficit now, Democrats automatically point to Reagan.
But it doesn't jive.
Because from 1980 to 1988 (when Reagan was in office) the deficit remained at five percent or less as a percentage of the GDP. In fact, the deficit peaked around 1983 and then was cut in half (to less than three percent) by the time Reagan left office.
Why? Because Reagan cut taxes, imposed spending limits and unleashed unprecedented economic growth. He knew what he was doing.
The second graph shows the deficit as a percentage of the GDP from 2000 to 2010.
Note that during the Bush years (2000 to 2008) the deficit remained at five percent or less.
In fact, at one point under President Bush the deficit was at a very low one percent of GDP. In Bush's last year (2008) it was three percent.
But look at the way it has soared under President Obama.
The deficit is now over TEN PERCENT of the GDP and still climbing.
So Obama has more than tripled the deficit as a percentage of the GDP.
And it's still climbing. This is not good for us, for our children or for our grandchildren.

And here's the chart for the Reagan years:

BTW: The "a" on the chart stands for "actual reported" deficit. The "b" stands for "budgeted."
Posted by Dan Cirucci at 7:42 PM