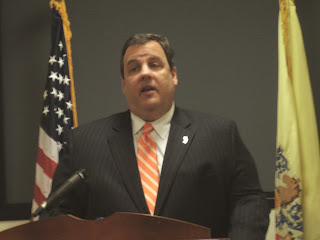 New Jersey Governor Chris Christie often doesn't know where he's going.
And even when he does know where he's headed, Christie doesn't know how to get there.
Now, this may or may not surprise you.
Or, it may actually concern you.
After all, Christie is in charge of one of the nation's most productive and most populous states.
But if Christie isn't concerned about this, why should you be?
And he isn't concerned.
In fact, the Governor freely admits that he's clueless as to where he's headed.
"My sense of direction is awful," Christie told a group of Philadelphia business leaders yesterday. "Somebody asked me exactly where in Philadelphia were we headed today," he told a Greater Philadelphia Chamber of Commerce confab at The Bellevue on Broad and Walnut Streets in Philadelphia. "I said I didn't know, just somewhere in Philly," Christie explained.
"When the car stops and a New Jersey State Trooper opens the door, I know I am where I'm supposed to be. That's the way it is for me now," said Christie who's been in office for about three months.
Yes, it's nice having your own driver and your own police escort. In that case, you really don't have to know exactly where you're going.
But even when the Governor has to drive himself, he's still hopelessly lost.
"When I'm driving and I come to a corner, my instincts sometimes tell me to turn right," he explained.
"But then I figure that my directional instincts are often wrong so I want to turn left. Then again, I'm asking myself: 'Why not turn right, after all?' That's how confused I am."
Now, tell the truth: What real guy doesn't have a dreadful sense of direction?
But how many guys would admit as much?
Must guys are notorious for wandering aimlessly without asking for help.
Not Christie.
He not only admits that he doesn't know where he's going but he also freely welcomes all the assistance he can get to help him get where he's going.
And within the Governor's self-effacing hyperbole lies an important lesson.
This is a guy who's confident in the knowledge that he's facing a huge task and he needs all the help he can get.
That's why he's got a great team surrounding him.
That's why all options (except those dreaded, destructive tax hikes) are on the table.
That's why he's willing to listen to the ideas of others and learn as much as he can.
That's why he'll copy successful ideas and strategies from other states to get New Jersey's spending under control, eliminate waste, cut taxes and get the Garden State's economic engine humming again.
And that's why he was in Philadelphia yesterday with the city's top business leaders seeking their help and support.
Christie is not only a quick learner but he's also irrepressibly human. And he isn't afraid to make a joke on himself if it will make a connection or build a bond with folks who can help.
"Thanks for letting me come over the bridge today without a visa," Christie told the assembled Pennsylvanians.
But the truth is that no visa was needed.
Such is the burgeoning appeal of New Jersey's engaging new Governor that he's welcomed wherever people seek a refreshing change from politics as usual.
Governor, wherever you're going, we're following!
Posted by Dan Cirucci at 11:32 AM