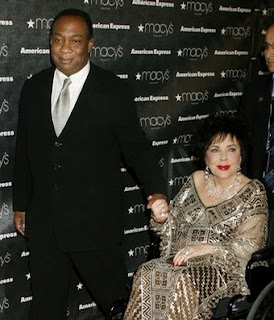 78-year-old Dame Elizabeth Taylor is going to roll down the aisle for the 9th time! This is what some source tells UsWeekly anyway. The source says that Dame Liz is engaged to her 49-year-old longtime piece Jason Winters.

The source said hat Jason isn't cut from the same gold digging cloth as Larry Fortensky. Jason is a talent manager who counts Janet Jackson as one of his clients. He recently bought a house for Liz.

Another source added, "It's no secret that they've been together forever and are in love, so it wouldn't be a surprise if they were engaged. Right now they are keeping it between them."