Philly Phanatic All Over Town! 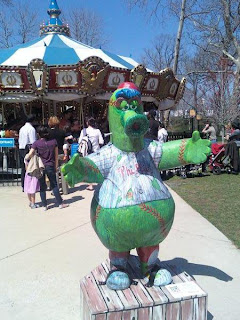 The Phillies and the Greater Philadelphia Tourism Marketing Corporation (GPTMC) have teamed up to launch the “Phanatic Around Town” public art project. The tourism and fan initiative features the Phillie Phanatic, one of Philadelphia’s favorite icons, and ties into GPTMC’s With Love, Philadelphia XOXO™ tourism marketing campaign.

This is the first time a Major League Baseball™ mascot will be molded into a public art project.

“Phanatic Around Town” features 20 Phillie Phanatic statues, all of which will be painted by local artists and put on display throughout Philadelphia from April until August 2010. Made of fiberglass, each statue weighs 100 pounds and stands five feet tall.