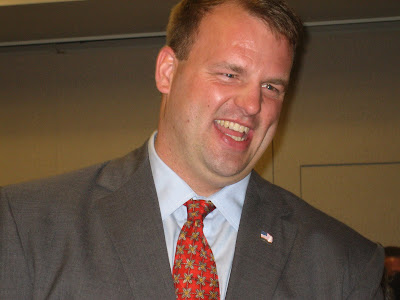 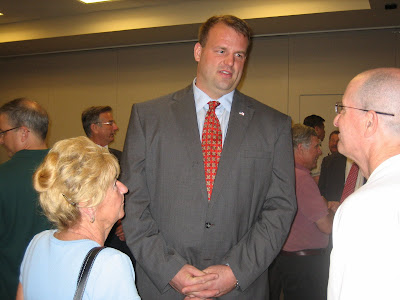 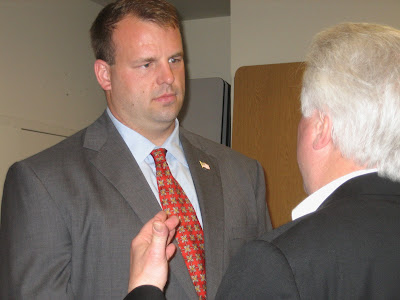 We were with the Jersey GOP's newest bright star again last night and, once again Jon Runyan charmed a crowd of voters with his attentiveness and his wonderfully responsive, easy-going manner.
Runyan came to Cherry Hill (his opponent's home turf) to advance his congressional bid in front of a crowd at the beautiful Cherry Hill Library on Kings Highway. And he was joined by Camden County and local Cherry Hill GOP candidates who are thrilled to have Jon at the top of their ticket.
To be sure, it won't be easy for Runyan to defeat his opponent, incumbent John Adler.
Adler is smart, articulate, well-funded and known to have good constituent services. And Adler is a nimble guy who knows how to position himself as a "moderate" in a more conservative district during a year when the GOP is highly energized.
But here's the thing about Runyan: he's focused, highly disciplined and ready for the fight. He seems to have studied enough playbooks and overcome enough obstacles (physical and otherwise) in his well-chronicled career to know how to win.
Once again I was impressed with the way that Runyan instantly sets people at ease. In an age of windy political bloviators and overblown egos, he actually listens to what people have to say. He's quiet and thoughtful. And he doesn't spit out quick answers and pre-packaged soundbites. Last night he listened, waited and took his time with each person.
Yes, it's nice to encounter an office-seeker who doesn't take all the oxygen out of the room when he arrives.
I asked Jon what he's been hearing from the voters. And last night he told me that people are deeply concerned about runaway government spending. They're worried about the growing debt and what it means for their future. He said that people really want government to get spending and taxes under control. "If we can begin to do that, " he added, "then we can begin to create jobs, and jobs are a huge problem right now."
Since he's not a career politician, Jon Runyan seems as horrified as the rest of us by the near pathological tax and spend policies that have fueled the ruling classes in Washington and Trenton for so long. "It's got to stop," he said.
Here's something to remember: Jon Runyan doesn't need to be a Congressman to be somebody. His life, his career and his good name don't depend on it. He doesn't need the fame. He doesn't need the money. He doesn't need the thrill of victory.
I think this makes Jon Runyan more independent, more candid, more real.
Maybe he just wants to do the right thing.
Posted by Dan Cirucci at 6:33 AM

Mr. Runyan may be a pleasant person, but if you go to his web site and listen to his interview with Neil Cavuto, you will find that all he does is repeat Republican talking points and exploit his celebrity status. No mention on our crumbling infrastructure, health care, poverty, education or other significant issues.