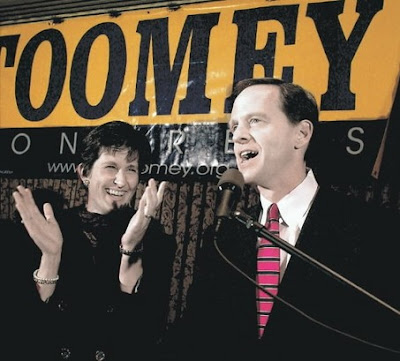 Republican Pat Toomey is on top 46 - 41 percent over Sen. Arlen Specter in Pennsylvania's U.S. Senate race, while Attorney General Tom Corbett, the leader for the Republican gubernatorial nomination, remains ahead of each of the three top Democratic contenders by double digits, according to a Quinnipiac University poll released today.
Gov. Ed Rendell's job approval rating is 45 - 45 percent, the independent Quinnipiac (KWIN-uh-pe-ack) University survey finds. But President Barack Obama's approval is a negative 45 - 49 percent, down from 49 - 46 percent.
Disapproval of the President's health care plan, 53 - 39 percent, is unchanged from a 52 - 37 percent disapproval March 2. Pennsylvania voters say 39 - 20 percent they are more likely to vote against a lawmaker who supported the health plan.
Toomey also leads U.S. Rep. Joe Sestak, who is challenging Specter in the Democratic primary, by 42 - 34 percent. Specter leads Sestak for the Democratic nomination 53 - 32 percent in a Quinnipiac University poll released yesterday of likely Democratic primary voters, a different sample.
Specter is a known quantity to Pennsylvanians since he has been their U.S. senator since 1981. Asked to rate him, 40 percent view him favorably, 46 percent unfavorably and 11 percent say they haven't heard enough about him to have an opinion.

In the governor's race, Corbett - by far the best known of the contenders - retains a double digit lead over the three leading contenders for the Democratic nomination, which will be decided in the May 18 primary.
Corbett gets a 47 - 13 percent favorability rating. For the Democratic contenders, Allegheny County Executive Dan Onorato, State Auditor General Jack Wagner and former U.S. Senate nominee Joe Hoeffel, the "don't know enough" factor ranges from 66 to 75 percent.
Posted by Dan Cirucci at 11:48 AM