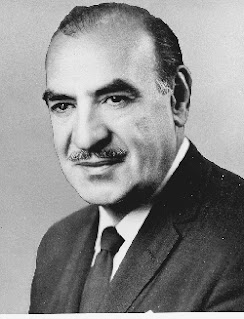 Anthony J. Celebrezze
Anthony Joseph Celebrezze Sr. (born Antonio Giuseppe Cilibrizzi) served as the 49th Mayor of Cleveland, Ohio, as a cabinet member in the Kennedy and Johnson administrations, and as a United States Circuit Judge of the United States Court of Appeals for the Sixth Circuit. As such, he was a genuine trailblazer.
Celebrezze was born in 1910 as one of thirteen children to Dorothy (née Marcogiuseppe) and Rocco Cilibrizzi in Anzi, a town in the administrative region of Basilicata, southern Italy.
The family moved to the United States when he was two years old, and the surname was Americanized in spelling to "Celebrezze." After having been a shepherd in Anzi, the father Rocco took an industrial job, becoming a track laborer for the Wheeling and Lake Erie Railroad in Cleveland. Like many of his immigrant generation, Anthony Celebrezze took odd jobs as youngster, shining shoes and selling newspapers.
He attended Cleveland Public Schools, graduating from Central High School and Fenn College (later developed as Cleveland State University). He graduated from John Carroll University in 1934. During his college years, he earned his way by working as a railroad laborer and freight truck driver, as well as boxer.
He later attended Ohio Northern University  where he received a Bachelor of Laws in 1936 from the Claude W. Pettit College of Law.
In 1938, he passed the bar and returned to Cleveland, where he entered the general practice of law. That same year, he married Anne M. Marco, a graduate of Western Reserve University and a teacher in the Cleveland Public School system. With the onset of World War II, Celebrezze enlisted in the United States Navy. Upon his discharge at the end of the war, he returned to private practice and then embarked on a successful political career, stedily rising from one office to another.
In 1961, after years of denying rumors that he sought a higher public office, Celebrezze was offered a federal judgeship by President John F. Kennedy, which was a lifetime appointment to a federal judgeship. Celebrezze turned it down to run for a record-breaking fifth consecutive term as mayor, which he won by an unprecedented 73.8 percent, sweeping every one of the city's thirty-three wards.
Kennedy appointed him also to serve on the Committee on Equal Employment Opportunity and the Commission on the Status of Women. In 1962, Celebrezze was selected as the president of the United States Conference of Mayors and then was appointed by Kennedy and confirmed by the US Senate to be Secretary of Health, Education and Welfare. He was the first Italian-American to ever hold a cabinet level post. Later Celebrezze was nominated by President Johnson and confirmed as a Judge of the U. S, Court of Appeals.
Posted by Dan Cirucci at 3:12 PM