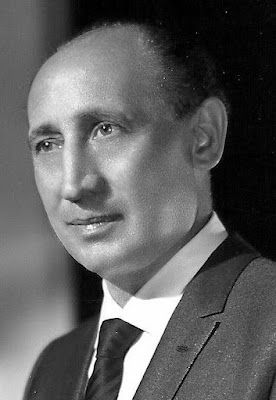 Some of you who read this may remember the little girl who easily turned a sofa (and in some cases even n ottoman) into a bed. The man who we spotlight today was her dad.

The convertible sofa was invented by Bernard Castro (1904-1991) who came from Italy and opened an upholstery shop in New York in 1931. In 1945, he invented the famous space-saving sofa that” even a child could open”. Born on Aug. 11, 1904, near Palermo, Sicily, Mr. Castro came to the United States with his father in 1919. He never finished high school but went to work as an upholsterer’s apprentice. In 1931 with $400 in capital, he opened his first store, which eventually became a chain he named ’’Castro Convertibles’’. Bernard Castro married Theresa Barabas on Valentine’s Day 1942. Their two children were Bernard, Jr. and Bernadette. Bernadette became famous in the New York area as the company’s official four-year-old spokesperson. Castro was a genius not only at designing a piece of furniture vital to people in space-cramped apartments during the Depression, but at marketing his product.

“By 1948, he discovered this new medium called television,” said his daughter, Bernadette. “There was just one station in New York, Dumont, and he was actually the first person to buy a local-spot commercial. When he called up and said, ‘I want to put a commercial on TV, they said, Go make one and bring it to us. ” At his death in 1991, he had sold over 5 million of his convertible sofas through 48 retail showrooms in 12 states, becoming a multimillionaire in the process.

Castro Convertibles was acquired in 1993 by Krause Furniture, a competitor. Bernadette Castro managed the sale to Krause but retained the large portfolio of commercial real estate her father had acquired in both retail and industrial. Those properties in New York, Florida, Connecticut and Virginia put the family in the real estate business. The Castro Convertible brand was retired until 2010 when Bernadette Castro and her children relaunched the business with one of the most popular original products, the Castro Convertible Ottoman. Rather than sell in retail locations, the new Castro was sold online.