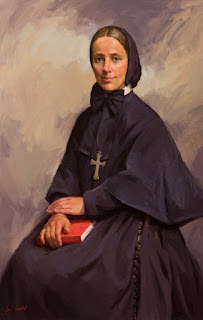 The youngest of thirteen children, Frances Cabrini was born on July 15, 1850 in a small village called S’ant Angelo Lodigiano near the city of Milan, Italy. She grew up enthralled by the stories of missionaries and made up her mind to join a religious order. Because of her frail health, she was not permitted to join the Daughters of the Sacred Heart who had been her teachers and under whose guidance she obtained her teaching certificate.

However, in 1880, with seven young women, Frances founded the Institute of the Missionary Sisters of the Sacred Heart of Jesus. She was as resourceful as she was prayerful, finding people who would donate what she needed in money, time, labor and support. She and her sisters wanted to be missionaries in China; she visited Rome to obtain an audience with Pope Leo XIII. The Pope told Frances to go “not to the East, but to the West” to New York rather than to China as she had expected. She was to help the thousands of Italian immigrants already in the United States. And this is how Frances became an inimitable part of the story of our own country.

In 1889, New York seemed to be filled with chaos and poverty, and into this new world stepped Mother Frances Cabrini and her sister companions. Cabrini organized catechism and education classes for the Italian immigrants and provided for the needs of the many orphans. She established schools and orphanages despite tremendous odds.

Soon, requests for her to open schools came to Frances Cabrini from all over the world. She traveled to Europe, Central and South America and throughout the United States. She made 23 trans-Atlantic crossings and established 67 institutions: schools, hospitals and orphanages.

Her activity was relentless until her death. On December 22, 1917, in Chicago, she died. In 1946, she was canonized a saint by Pope Pius XII in recognition of her holiness and service to mankind and was named Patroness of Immigrants in 1950.

Today the Missionary Sisters, their lay collaborators and volunteers work as teachers, nurses, social workers, administrators and members of institutional boards of trustees. They can be found on six continents and 17 countries throughout the world – wherever there is a need.