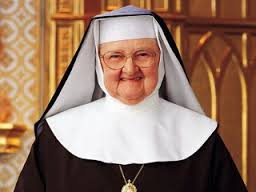 Mary Angelica of the Annunciation PCPA was born Rita Antoinette Rizzo in 1923. She was also known simply as Mother Angelica. She was an American Roman Catholic nun of the Poor Clares of Perpetual Adoration. But she was best known as a television personality. Mother Angelica was a pioneering visionary and founder of the international broadcast cable television network Eternal Word Television (EWTN) and the radio network WEWN. EWTN became a voice for Catholics worldwide.

In 1981, Angelica started broadcasting religious programs from a converted garage in Birmingham, Alabama. Over the next twenty years, she developed a media network that included radio, TV, and internet channels as well as print media. Angelica hosted shows on EWTN until she had a stroke in 2001. She continued to live in the cloistered monastery in Hanceville, Alabama, until her death at age 92 on March 27, 2016.

Mother Angelica's nightly TV program remained true to the traditional teachings of the Catholic faith while making those teachings understandable to millions through anecdotes, recollections, loving counsel and a homespun style that generated countless devoted followers. In fact, it's safe to say that many who might have become fallen away Catholics remain true to the faith today because of the teachings and testimony of Mother Angelica.

Mother Angelica had a hardscrabble upbringing and through much of her life she endured pain and suffering. She was the only child of John and Mae Helen Rizzo (née Gianfrancesco).  Her father, a tailor by trade, abandoned the family when Rizzo was only five, and her parents divorced two years later.  On March 10, 1931, her mother was granted custody of the young Rizzo, and her father was ordered to pay five dollars a week in child support. Her mother only received "intermittent child-support payments from the father". While maintaining full custody, her mother struggled with chronic depression and poverty. This was in part because being a divorcée carried a social stigma at the time and the opportunities for a woman to secure income were limited especially in the height of the Great Depression. When her mother's mental condition seemed to worsen, she made arrangements with her grandparents to have her sent to Philadelphia to be with a relative.

As a young woman, Rita Rizzo stopped at a church to pray and felt that God was calling her to be a nun. She sought guidance from a local parish priest who encouraged her to begin visiting convents. Her first visit was to the Sisters of St. Joseph in Buffalo, New York, but the active congregation felt that she was better suited to contemplative life. She also visited Saint Paul's Shrine of Perpetual Adoration, a facility operated by an order of cloistered contemplative nuns, located in Cleveland, Ohio. When visiting this order, she felt as if she were at home. The order accepted her as a postulant, inviting her to enter on August 15, 1944. She was 21 years old.

From there she went on to eventually establish a cloistered community in Alabama that became Our Lady of the Angels Monastery. It grew over the years and, with Mother's tireless energy and guidance, it built the largest Catholic communication network in the world as EWTN grew exponentially with the advent of cable television, satellite radio and the internet.