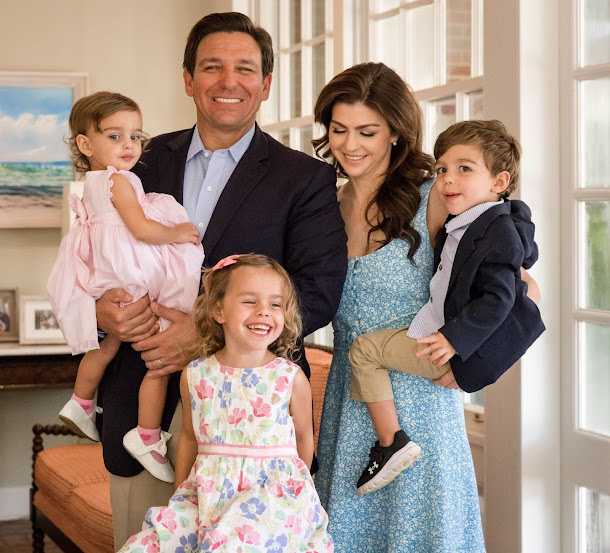 Ronald Dion DeSantis
He's a fighter, a veteran, a visionary and arguably, the most intriguing public servant in America today.

He's Florida Governor Ron DeSantis, a major national figure and the former U.S. Representative for Florida’s Sixth District. The son of Karen and Ronald Daniel DeSantis, he is of Italian descent. His mother was a nurse and his father installed Nielsen TV rating boxes.

A native Floridian with blue-collar roots, Ron DeSantis worked his way through Yale University, where he graduated with honors and was the captain of the varsity baseball team. He also graduated with honors from Harvard Law School. While at Harvard, he earned a commission in the U.S. Navy as a JAG officer. During his active-duty service, he supported operations at the terrorist detention center at Guantanamo Bay, Cuba and deployed to Iraq as an adviser to a U.S. Navy SEAL commander in support of the SEAL mission in Fallujah, Ramadi and the rest of Al Anbar province.  His military decorations include the Bronze Star Medal for Meritorious Service and the Iraq Campaign Medal.

After active-duty service, DeSantis served as a federal prosecutor, where he targeted and convicted child predators.  He was first elected to Congress in 2012, where he fought for term limits, the No Budget/No Pay Act, and to cut taxes.  While serving in Congress, DeSantis refused his Congressional pension and health insurance plan because he is against special deals for politicians.  He also sponsored legislation to make it easier for the military to prosecute sexual assault and authored the bill to end the secret taxpayer-funded slush fund for members of Congress to make hush payoffs for sexual harassment.

Governor DeSantis is married to Casey DeSantis, an Emmy Award winning television host. Together, they’re the proud parents of their daughters, Madison and Mamie, and their son, Mason.