The Timeless Secrets Behind Profound Rhetoric 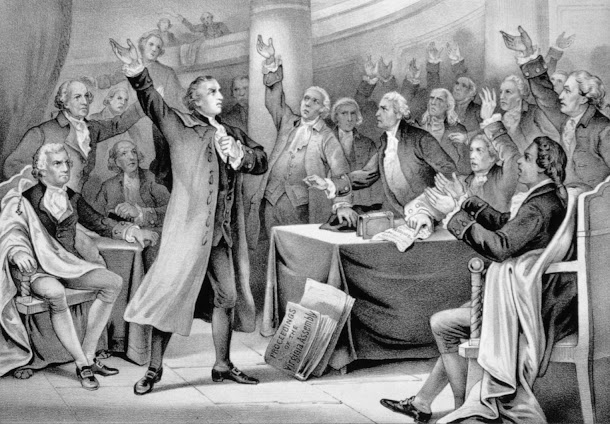 Biden's public speaking is a mess. He mumbles, grumbles, meanders. He throws in irrelevant asides and senseless anecdotes. He loses his place, loses his way, loses his train of thought. He hasn't said anything profound in . . . well, maybe never! The one time he tried, he plagiarized someone else's remarks.
Great speakers need to be able to utter great lines -- memorable words and phrases.
Patrick Henry (above) said: "Give me liberty or give me death."
Franklin said: "A republic, if you can keep it."
Lincoln said: "Of the people,  by the people, for the people."
FDR said: "The only thing we have to fear."
Churchill said: "Blood, sweat, toil and tears."
JFK said: "Ask not what your country can do for you . . . "
MLK said: "I have a dream."
Reagan said: "Mr. Gorbachev, tear down this wall"
These words are enshrined. They are seared into our consciousness. They are part of history.
But can you tell us one profound thing that Barack Obama said? Huh?
He was billed as a great orator but if you listen -- really listen -- he hasn't said very much that's artful or memorable or worthy of the ages.
As Gertrude Stein once said: "There's no there, there, when you get there."
And that's a shame, because Barack Obama certainly had his opportunities. Still, virtually nothing worth treasuring is remembered from his two inaugural addresses or his annual State of the Union speeches or his many, many other moments of speechifying.
And pretty much the same could be said of Bill Clinton whose most famous line was, sadly: "I did not have sex with that woman, Ms. Lewinsky."
And Nixon? Well, he's to be remembered for "I am not a crook."
Truly, a well-turned phrase can make all the difference. It was President Gerald Ford who, in the wake of Watergate, reassured us that "our long national nightmare is over." And then, with customary humility (and a refreshing bit of humor) the accidental president confessed: "I'm a Ford, not a Lincoln." Clever, that.
And let's not forget Lyndon Johnson who, in the aftermath of JFK's assassination echoed Kennedy's "let us begin" line with this: "Today in this moment of new resolve, I would say to all my fellow Americans, Let Us Continue. This is our challenge–not to hesitate, not to pause, not to turn about and linger over this evil moment but to continue on our course so that we may fulfill the destiny that history has set for us." These are words that were not only right for the moment but that have clearly stood the test of time as well.
To be fair, even George W. Bush gave us great, reassuring words in an ominous moment when, after September 11, he declared: "Whether we bring our enemies to justice or bring justice to our enemies, justice will be done." No one who heard Bush utter those words should have had any doubt that we would soon be at war with those who brought such horror upon our land.
Where do these words come from? How are the right words found for the right time, the right occasion, the right moment? Indeed, they often emerge from the crucible of crisis. But they also reflect the hope or the tough love or the straightforward, unvarnished resolution of visionary leaders. And the words must be carefully strung together by diligent speechwriters -- craftspersons in the magic of artful articulation.
Good speechwriters know that every great speech has three vital components: a solid theme; a clear purpose and a sound structure.
The theme is the overarching idea of the speech. The theme must be so clear and simple that you ought to be able to express it in one sentence. The theme of FDR's first inaugural address? Very simply, it was: "We're in a helluva mess but we're gonna pull through this together, fearlessly and with unquestioned resolve." That's precisely what people needed to hear. It's what they were thirsting for.
The purpose of the speech boils down to what you want the audience to think, feel or do once they've heard the speech. In other words, why are you giving this speech? What do you hope to accomplish?
The purpose of FDR's first inaugural address was to reassure and rally the nation and the Congress to his cause -- to pull everyone together for the struggle ahead.
The structure must be clear to the audience. It's their roadmap. That means a speech must have a definite beginning, middle and end. In the beginning,  you forge a vital, human link with your audience. In the middle, you deliver your core message, usually with two or three simple points. In the end, you conclude and call the audience to action.
It all sounds very simple, but it's not. It's tough, hard, often grueling work. And an undisciplined speaker can make it much, much harder.
Both Obama and Clinton tinkered with their speeches too much. Clinton kept changing lines right up until the very moment of delivery. Obama always thought he knew better and was often less punchy and more hesitant in delivery than many thought. Quite simply, he was over-confident. Ford and LBJ were legislative wizards who were accustomed to operating in the backchannels of government. They had to learn to be public speakers -- and it showed.
JFK, FDR and Reagan were the greatest presidential public speakers of the modern era. They were master wordsmiths themselves; they loved language; they were natural performers; they had finely-tuned ears; they understood modern media and they were steadfastly disciplined. Consequently, they triumphed.
Posted by Dan Cirucci at 7:44 AM