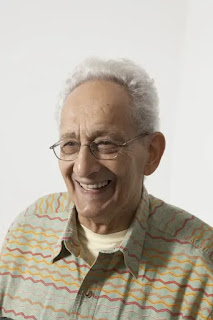 He's unquestionably one of America's most renowned artists -- and one of its most versatile. And his works of art can be found in just about every major museum throughout the world.
He's Frank Stella, a painter, sculptor, printmaker, graphic artist and creative dazzler. He's been a pioneer in abstract expression, minimalism, modernism, geometric art, hard-edged painting and color field painting. And, at 85 he's still going strong.
Frank Stella was born in Malden, Massachusetts, to parents of Italian descent. His father was a gynecologist, and his mother was a housewife and artist who attended fashion school and later took up landscape painting.
Stella earned his degree in history from Princeton University. He moved to New York in 1958, where he developed his artistic talents. He painted with intent to flatten surfaces and often chose square canvases. In the 1970s, Stella created "maximalist" paintings, which were paintings that involved relief and sculptural elements in stark contrast to the "minimalist" paintings of his early career.
Arguably one of the most influential living American artists, Stella’s works utilize the formal properties of shape, color, and composition to explore non-literary narratives. “Abstraction didn't have to be limited to a kind of rectilinear geometry or even a simple curve geometry. It could have a geometry that had a narrative impact. In other words, you could tell a story with the shapes,” he explains.
“It wouldn't be a literal story, but the shapes and the interaction of the shapes and colors would give you a narrative sense. You could have a sense of an abstract piece flowing along and being part of an action or activity.”
Stella was immersed in the heyday of abstract expressionism, but it was the work of Jasper Johns that inspired Stella’s Black Paintings of 1958-1960. These flatly painted, austere works, helped open up the doors to Minimalism. Through the following decades, Stella gained traction in the art world and in 1970 he became the youngest artist ever to be granted a solo exhibition at The Museum of Modern Art.
Part of a month long series spotlighting a different accomplished Italian American every day during Italian American Heritage Month.
Posted by Dan Cirucci at 8:35 AM