Once Again, the Administration’s COVID Policies are Shown to be Based More on Political Science Than Health Sciences 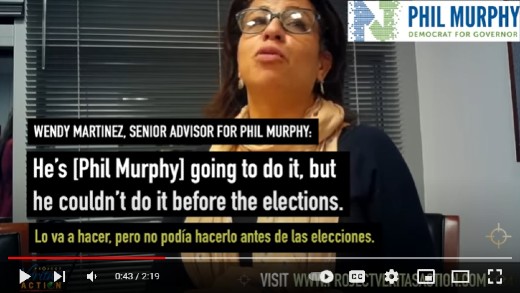 In the recording, two individuals with close ties to the campaign, including a woman identified as a senior advisor for the Governor, explained that Murphy planned to enact vaccine mandates after he sealed up the election.

“Wake up, New Jersey. This is how the Governor treats our residents,” said Senator Joe Pennacchio. “He has every intention of abusing his self-appointed emergency powers to force vaccines on every one of us, but he knows the public won’t stand for it. As the past has indicated, he will issue his rules and edicts with no transparency.”

“He’s going to do it [vaccine mandates], but he couldn’t do it before the elections,” Martinez said. “The independents and the undecided would not vote for him if he did the mandates because they’re all into all the sh**. My rights, my sh**.”

“Let’s face it. Since the beginning of the pandemic, the Governor has not been forthcoming with the people of New Jersey,” Pennacchio said. “His willingness to beguile residents is disconcerting. He has refused to explain why he opened prison cells while forcing the deadly virus into nursing homes and locking the doors, why he allowed long lines in big box stores but prevented people from standing in line for in-person voting, why he did ignored the words of nursing home administrators when he was told point blank that his policies would lead to people dying, and why he and the Democrats have refused any legislative oversight and investigations into his deadly pandemic policies.

“Forcing vaccine passports on state residents under the cloak of darkness after an election continues this administration’s long history of obfuscation, deflection and insincerity,” Pennacchio continued.

The Project Veritas video also shows a discussion between a reporter and a manager for NJ Forward 2021, a campaign project funded by the New Jersey Democratic State Committee.

“I think the problem is right now because it’s election season … I mean, once you know we have a win, he’s like, all right, guns blazing, like who cares. I’m in it. Let’s do the mandates. Let’s do this,” said the manager identified as Matthew Urquijo.

“This is despicable treatment of New Jerseyans who endured extreme losses and disruptions under this Governor’s heavy-handed rule,” Pennacchio continued. “This is not the way elected officials should treat the people who rely on their truthful leadership. The Governor’s treachery is unforgivable.”