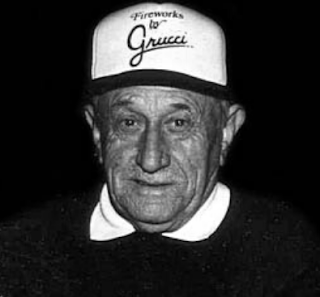 Felix Grucci and the Grucci Family

Do you like fireworks? If you do, you can thank the Gruccis.

Angelo Lanzetta immigrated from Bari, Italy to Long Island, NY in the late 1800s and brought the family’s pyrotechnic business with him. After his passing, his son Anthony took over the family business and brought in his cousin, Felix Grucci, Sr. to serve as an apprentice.

In 1979, the Gruccis became the first American family to win the Gold Medal for the United States at the annual Monte Carlo International Fireworks Competition, the most prestigious fireworks competition in the world, beating other competitors from Denmark, France, Italy and Spain. They became the "First Family of Fireworks".
In 1983, the company and family, suffered a severe setback when an explosion destroyed the Bellport facility and Felix’s son, and another family member were killed. The family was on the verge of closing the business, but thousands of cards and letters, along with keeping the business going in memory of their lost loved ones, convinced them to continue. Two years later, the company, now Fireworks by Grucci, dedicated a new plant on 80 acres in Brookhaven, just a few miles from their Bellport location.
From the Monte Carlo launching pad, the Gruccis continued their climb over time to be recognized throughout the world as the "Top Name in Fireworks Entertainment". They earned this title with fireworks for every presidential inauguration since Ronald Regan in 1981, every major casino grand opening since the Mirage in 1989 to the Wynn Macau to Sol Kerzner's Atlantis, Olympic Games, World's Fairs, and Centennial celebrations of the Brooklyn Bridge and the Statue of Liberty and the opening of the Atlantis Palm in Dubai, billed as the largest fireworks show to date.
Since 1850, the business is still family-owned, now in its sixth generation, Phil Grucci, the grandson of Felix Sr., is the President/CEO. Fireworks by Grucci, is one of the oldest fireworks companies in America and one of the most respected in the world.
Posted by Dan Cirucci at 7:12 AM