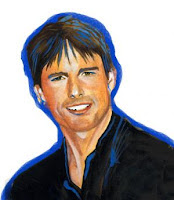 Gawker tells us: "You have to watch this video. It shows Tom Cruise, with all the wide-eyed fervor that he brings to the promotion of a movie, making the argument for Scientology, the bizarre 20th-century religion. Making the argument is an understatement. The Hollywood actor, star of movies such as Mission Impossible, is a complete fanatic. 'When you're a Scientologist, and you drive by an accident, you know you have to do something about it, because you know you're the only one who can really help... We are the way to happiness. We can bring peace and unite cultures.' There's much much more. . . if Tom Cruise jumping on Oprah's couch was an 8 on the scale of scary, this is a 10."
Posted by Dan Cirucci at 3:33 PM

dan i have to say that i knew you at a time when you were a truely committed and articulate supporter of left wing causes and have to ask the following was it your involvement with the state bar that changed you into a right winger? i remember your support of gene mc and your vow to feel the pulse of pa. in quest of a primary victory for clean gene que paso?

No, my involvement with the State Bar of New Jersey had little or nothing to do with my political views. I've always maintained a clear separation between my professional responsibilities and my political views.
I'm very proud of my work for Gene McCarthy way back then - wouldn't have changed a thing.
I didn't change so much as the Democratic Party did.
Jimmy Carter had a profound influence on my views. I voted for him and, in my opinion, he turned out to be a disaster. I was mortified.
I've always sought out bold, clear, dynamic, optimistic leaders who don't forget to listen to the people and trust in their common sense. Ronald Reagan fit the bill. As Barack Obama just recently pointed out, Reagan "changed the dynamic." He captured the imagination of many people. I was one of those people. Reagan changed the course of politics and the course of our nation. He was a leader.
My father was a lifelong Democrat but his last vote was for Reagan. There were millions of others like him.
I'm always open to new ideas, new views, new ways of looking at things and I've never ruled out moving back in the other direction where I trust I would still be welcomed by many lifelong friends.