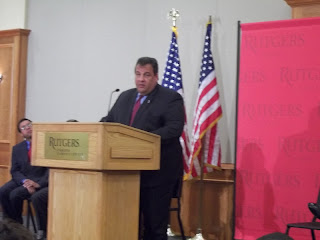 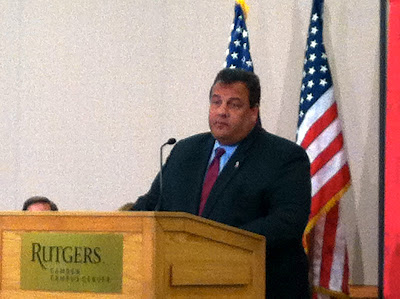 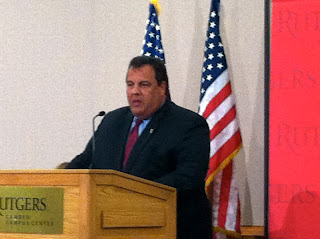 New Jersey Governor Chris Christie was in Camden at Rutgers yesterday to sign the landmark Higher Education Reorganization Act and in his own inimitable way, he once again laid it all on the line.
Christie, who caught a lot of heat for his sweeping proposals to merge, consolidate and expand major New Jersey universities and medical schools said he expected all along that his plan would involve a difficult battle.
"I knew this was gonna be tough, " Christie said. "I knew there would be protests. I didn't come here to be elected prom queen."
Christie said he came in with a sweeping proposal but he never expected all of his ideas to become law. "When you have a legislature of the opposite party, you know going in that you're not going to get everything you want," he explained.
Christie noted that other governors before him tried to reorganize higher education in the state and they failed. The Governor said this is why he asked former Governor Tom Kean to chair a broad-based group to help steer the proposal in the right direction. "When I asked Governor Kean what my chances were of getting this adopted, he simply smiled," Christie explained. "We're very grateful to Governor Kean that he once again stepped forward to serve the public."
When asked if there may have been an easier way to accomplish the reorganization, Christie answered "No" and added: "We had to get this done. And I set a July 1 deadline because I knew that July 1 was when the legislature would be going on its summer break."
To students who were upset about all the turmoil that the plan caused, the Governor said: "This is the way life is. Grow up. This is the real world. This is how things get done."
The Governor also took note of the importance of South Jersey and its educational and medical facilities. "I want to assure you that I care every bit as much about this part of the state as I do Central Jersey and North Jersey."
Christie described his relationship with the Democrat legislature this way: "You know, in Washington and in a lot of the states, Democrat and Republican officials fight and they call each other names and they issue press releases." Then the Governor paused. "Well, we do that here too," he added. "But then we sit down and we try to work things out. We work together."
In other matters, the Governor was asked to give a preview of his keynote speech at the GOP convention next week but he demurred. "All I can say it, it's hot and humid in Tampa in August. Can you imagine me down there? I'm gonna need a freezer," Christie joked.
It was a good day for the Governor who shared the triumph with State Senate President Steve Sweeney and others.
We had a chance to chat with the Governor after his remarks and he seemed in high spirits and not the least bit concerned about not getting the call to be Mitt Romney's running mate. He said he is looking forward to keynoting the convention and once again expressed thanks for our (and your) continued support.
Photos copyright 2012 by Dan Cirucci.