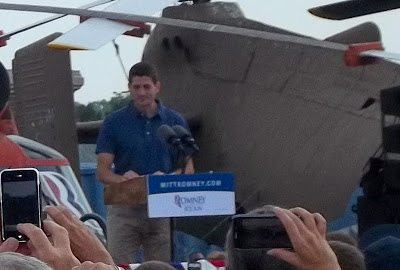 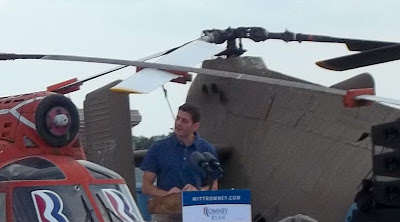 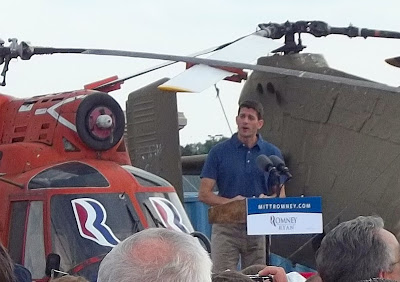 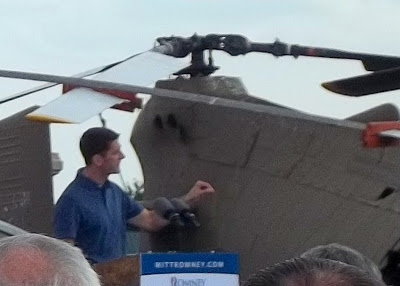 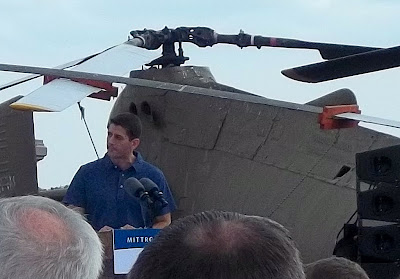 Photos copyright 2012 by Dan Cirucci.
Here are some exclusive photos of GOP Vice Presidential candidate Paul Ryan from his appearance yesterday in suburban Philadelphia at the American Helicopter Museum in West Chester, Pennsylvania.
Ryan spoke in front of a large crowd of more than 3,500 people who stood in a long line to gain entry to the event and then stood on the museum's lawn during the entire program. But no one seemed to mind.
Everyone was so excited about seeing Ryan -- America's newest political sensation.
This was the first time I've seen Ryan in person so I really didn't know what to expect.
I found him to be remarkably appealing; direct and forthright. Ryan speaks very clearly and convincingly and stays relentlessly on message, but with thoughtful points and cogent observations.
His grasp of facts and figures can be breathtaking but surprisingly, these do not form the cornerstone of his argument. He doesn't use a teleprompter and if he had notes it was hard to discern how he was using them. He's very natural and surprisingly young-looking in person with an easy-to-like, approachable presence.
He has an earnest charm and actually reminds me a bit of that wonderfully clean-cut country singer Brad Paisley. He knows his audience and responds to the crowd beautifully but he doesn't "play" the crowd. Unlike some politicians, he's not manipulative and one get the sense he'd never, ever pander.
It's clear that Paul Ryan is his own man. This is a fresh, young leader who is mature beyond his years. Having faced his father's death at a relatively young age, he learned the the cold, hard realities of life early on. He discovered that life can be cruel; that life is unfair.
Clearly, this made him tougher and increased his resolve. But while it may have made him tough, it did not make him hard, or cynical or bitter.
To the contrary, he seems to have plowed all his energy into becoming the sort of person, son, husband, father and leader who would have made his dad proud. One figures that many factors played into this: his deep faith; his strong, close-knit family; his upbringing; his own pride, discipline and determination and his solid Midwestern values.
And those critical factors and all that hard work paid off.
Paul Ryan has now come into his own. This is his moment. And it's great to watch!