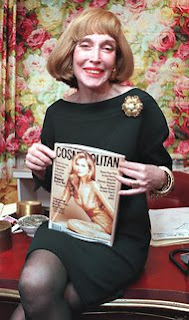 She certainly was in the vanguard of the sexual revolution.
She galvanized the nation when she wrote Sex And The Single Girl in 1965, taking a frank look at sex from the female point of view long before Sex And The City.
And when she took the faltering Cosmopolitan magazine and transformed it into a sort of guide for sexually empowering women, she set the publishing world on its ear.
Helen Gurley Brown has died at age 90.
She died Monday morning.
A spokesman for the Hearst Corporation, which publishes Cosmopolitan, said that Brown died after being hospitalized briefly at NewYork-Presbyterian/Columbia hospital.
The Hearst statement reads: “It would be hard to overstate the importance to Hearst of her success with Cosmopolitan, or the value of the friendship many of us enjoyed with her. Helen was one of the world’s most recognized magazine editors and book authors, and a true pioneer for women in journalism — and beyond.”