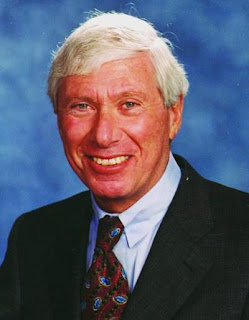 It is with great sadness that we have learned of the passing of Philadelphia lawyer Jerome R. Richter.
Jerry Richter was not only one of the kindest, most caring, sweetest professionals we've ever met but he was also a leader among Philadelphia's legal eagles and was a past chair of the board of governors of the Philadelphia Bar Association. He also held other leadership positions in that association, including founder and chairman of the victims rights committee.
He served for years as one of Philadelphia’s zone representatives to the American Bar Association and was a past chairman of the Pennsylvania Bar Association judicial administration committee.
We had the pleasure of working for Jerry Richter when he chaired the Philadelphia Bar Association's Board of Governors and he was a joy to work with. Jerry was careful and thorough and always expected the best of all those around him but he never, ever raised his voice or lost his temper or showed any sign disharmony. He was impeccable in his personal appearance with extraordinary sartorial taste but his presence was never intimidating. To the contrary, his warm blue eyes, bright smile and reassuring gray mane immediately set one at ease.
We remember Jerry not just as a leader and sportsmanlike competitor who always played by the rules but also as a kind and caring counselor -- the kind of lawyer that even other lawyers sought out for advice.
Jerry began his career as a law clerk to Judge Joseph Sloane of the Court of Common Pleas of Philadelphia County and later served as an assistant U.S. Attorney for the Eastern District of Pennsylvania and assistant city solicitor in Philadelphia before joining the firm of Blank Rome. He spent his entire career at Blank Rome before retiring at the beginning of 2009.
At the firm Jerry handled a variety of litigation matters as well as complex civil and white-collar crime and insurance cases. He was directly connected to the firm's founders, having made partner within four years and having worked closely with the legendary Marvin Comisky and Edwin P. Rome.
Blank Rome Co-Chairman and Managing Partner Alan J. Hoffman said this about Richter: “Jerry exemplified the very best attributes of a litigation attorney; he was thoughtful, wise, and tenacious in his preparation, and fearless in the courtroom. Jerry was very much a part of the fabric of Blank Rome and left his personal and professional mark on the firm. He will be sorely missed.”
Jerry Richter was involved in a hotly-contested race for Chancellor of the Philadelphia Bar Association in 1985. Few who witnessed that race will ever forget it. Jerry didn't become Chancellor but no one ever called him a "loser." Indeed, he brought grace and dignity to that contest just as he did to every other endeavor that he was involved in. Always, he simply seemed to be a man without malice.
Jerry was that rarity: A lawyer whose decency and humanity were never at play in the high stakes game of litigation.
In addition to Sheryl Auerbach, his wife of 35 years, Mr. Richter is survived by children Silvia Schencker, Melanie Dickinson, Will Richter, Lauren Chandler and Jonathan Richter; grandchildren Sondra Schencker, Lindsay Schencker, Max Schencker, Alex Dickinson and Ashley Dickinson; and sister Janet Hershaft.
Relatives and friends are invited to services on Wednesday, Aug. 22 at 11:00 a.m. at the Har Zion Temple, 1500 Hagys Ford Road, Penn Valley, Pa. Interment will be at Haym Salomon Memorial Park. The family will return to the Richter home in Villanova and respectfully request that contributions in his memory be made to Jupiter Medical Center in Jupiter, Florida.