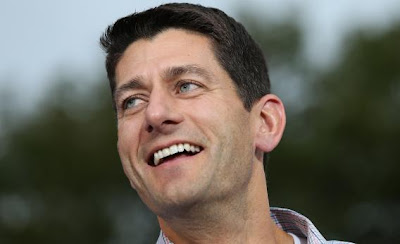 Kennedyesque.
That's the only word I could think of as I watched Paul Ryan speak live at the GOP Convention last night.
Why do I feel this way?
Youth is the first factor. Ryan is about the same age that JFK was when Kennedy captivated the nation. Ryan's young and attractive family is another important factor. And even his relatively youthful looking mom and her inspiring story reinforce this image.
But there's more.
Ryan keeps saying "we can do this." And he believes it with the confidence and determination that only a young person can bring to the task. This is heartening, it's encouraging, it's great to hear. Ryan's optimism -- the optimism of a new generation -- helps to restore our faith in the future. He's stepping up and telling us that his generation and the ones that follow aren't merely ready to tackle the big job of reclaiming our nation's fiscal well-being and stature, they're actually anxious to get on with the job. They can't wait. They want to be part of the solution, not part of the problem. And if you're in their way, you'd better move aside.
Kennedy said "the torch has been passed to a new generation."
Ryan says essentially the same thing.
Kennedy said "we can do better" and "we've got to get America moving again."
Ryan basically repeats those lines.
Kennedy charged that those in power had their moment, that their ideas had become tired and worn-out, that their plans no longer worked.
Ryan convincingly makes the same charges once again.
Kennedy challenged us to roll up our shirt sleeves and to work together to get our country back on track.
So does Ryan.
Kennedy refused to believe that America could or should relinquish its position as the leader of the free world.
Ryan advances that theme as well.
It's almost as if the torch really has been passed -- across eras and across generations from one son of Ireland to another -- from Kennedy to Ryan.
Paul Ryan also exhibits the same appealing presence and sometimes awkward charm that Kennedy showed. As with Kennedy, Ryan seems surprised at times at the adulation that has come his way. And like Kennedy, he's also able to make a joke about himself. And he did that again last night.
Certainly, Ryan is exceptionally bright -- as was JFK.
And Ryan isn't afraid to advance bold ideas (reforming and preserving Social Security, cutting the debt, balancing the budget) in the same way that Kennedy did (sending a man to the moon, cutting taxes to boost the economy, closing the missile gap).
But here's something that Ryan has that Kennedy didn't have: a sincere earnestness and a relentless determination. At times JFK seemed ambivalent about his political journey. No so with Ryan.
Ryan is the kid that you barely noticed on the first day of class in high school or college. You hardly knew he was there. But day-by-day and week-by-week and month-by-month he began to make a difference and he stood out and people started to gravitate to him. You realized that not only did he have the right answers but that he was helpful and jocular as well -- he could be a pal. And damned if this somewhat nerdy guy didn't manage (more often than you'd think) to get the gal as well.
This is what I see in Paul Ryan.
As I left the Tampa Bay Times Forum last night I felt something I hadn't felt since 1960 -- a real sense of a new generation stepping forward. And, I gotta tell ya, I felt for like I was part of it; like I was a teenager again, following a dream.
For just a moment the sky was broader, the horizon seemed brighter and the possibilities appeared to be infinite.
That's powerful stuff.
So, be sure of this: A star was born last night!