Philly Museum Purchases 'The Fox And The Grapes' 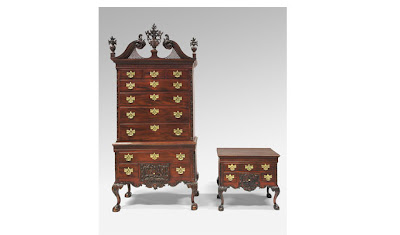 The Philadelphia Museum of Art has agreed to purchase the exceptional mahogany dressing table that has been on loan to the Museum for 36 years.
Made in Philadelphia in the late 1760s or early 1770s, the table is the mate to the Museum’s monumental high chest, which was donated in 1957 by Amy Howe Steel Greenough.  The dynamic carved decoration on both the high chest and the dressing table depicts a scene from Aesop’s fable of “The Fox and the Grapes” on their central drawers. The impressive proportions of these remarkable examples of 18th-century craftsmanship echo the architectural framework of the bedchamber for which they were made.
Together, they epitomize the elegance and sophistication that distinguish Philadelphia furniture as the finest produced in British colonial North America.
“The Museum has now realized its cherished dream of keeping ‘The Fox and the Grapes’ dressing table together with its companion high chest,” said Timothy Rub, the Museum’s George D. Widener Director and Chief Executive Officer.  “The two anchor our galleries of early American art; and now that their future together is secure, we can continue to display and interpret them as superlative artistic achievements.”
The high chest was known to Museum curators early in the 20th century when it was borrowed from Mary Fell Howe for the 1924 exhibition Philadelphia Chippendale. Lauded for its stately presence, highly figured mahogany, abundant carved ornament, and the rare depiction of a narrative from one of Aesop’s fables, the high chest also generated curiosity about whether or not its companion piece—the dressing table—was still in existence.
“The Fox and the Grapes” dressing table was soon discovered and made its debut in William MacPherson Hornor, Jr.’s 1935 publication The Blue Book of Philadelphia Furniture: William Penn to George Washington. Joseph Kindig, Jr., the preeminent York, Pennsylvania, furniture and gun dealer, purchased the dressing table from Miss Eliza Davids in the late 1930s.  Though Kindig was an antiques dealer, the dressing table was not offered for sale.  Instead, it remained in the Kindig’s private home. Mr. Kindig died in 1971, and soon thereafter a friend of the Museum alerted curators to the whereabouts of the coveted “Fox and Grapes” dressing table.  The Kindigs agreed to lend the dressing table so it could be displayed next to its high chest in 1976 for Philadelphia: Three Centuries of American Art, the great survey celebrating American art exhibited at the Museum during the bicentennial year.  The two looked superb together—each had found its accompaniment—and after the exhibition closed, the dressing table remained on loan to the Museum.
The purchase of the dressing table will be funded by gifts already received or to be solicited from generous individuals over the next several years as well as through funds raised by the deaccession and sale of less significant furniture in the Museum’s collection.
The deaccessioned works of art include a Philadelphia easy chair dating to about 1755 that the Museum purchased in 1925 and two colonial side chairs that will be sold at the September Americana sale at Christie’s in New York. Ten pieces of American furniture, including a colonial Philadelphia high chest, dressing table, turret-topped card table, and tilt-top tea table as well as an 1829 painted chest of drawers from the Mahantango Valley, will be sold at Sotheby’s in New York in January.
Posted by Dan Cirucci at 5:38 PM