Tribute: Phyllis Diller, As I Remember Her 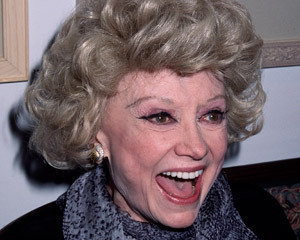 She had a voice that could peel the paint off the hood of a Buick and a laugh that lit up the night.
She said things a lady wasn't supposed to say.
She talked about things that a housewife and mother wasn't supposed to talk about.
She did things that ripped the ienne off the term "comedienne."
Long before Joan Rivers and Roseanne Barr and Kathy Griffin she defined a new generation of female standup comics.
She was a trailblazer.
She was the wild, the outrageous, the raucous, the inimitable Phyllis Diller.
Phyllis Diller died in her sleep on Monday at age 95, her longtime manager said.
Diller was found in her bed at her home in the Brentwood section of Los Angeles by her son, Perry, who had come to visit her, manager Milt Suchin said.
"She had a smile on her face, as you'd expect," Suchin told Reuters.
We met Phyllis Diller in the mid 1980s when she came to perform at a Philadelphia Bar Association event in Atlantic City. We went backstage to greet her and the mere sight of her was as outrageous as you'd expect: wild colors, mismatched clothing, neon demi-boots, spiked hair, thick makeup, the works. But she was gracious and friendly and surprisingly soft-spoken in person -- until she walked out on stage. Then, all hell broke loose. And if you didn't laugh at one of her jokes, she certainly did -- and with a cackle that sent shivering sound waves through the auditorium.
When she performed, she actually appeared to be having as much fun as anyone else and more often than not the joke was on her: Her bad luck with men; her many facelifts and other cosmetic surgery; her struggles with her witless husband, Fang, her inability to even match her shoes or her belt or the color of her hair (wig?) with the rest of her outfit.
She was, quite simply a laugh riot -- a shrill, outrageous mess.
Phyllis Diller was a late-bloomer in show business who got her start at age 37. She made her debut at San Francisco's Purple Onion in 1955 as she broke into the male-dominated comedy circuit. Her first national exposure came as a contestant on Groucho Marx's TV quiz show "You Bet Your Life."
At that time Diller was a housewife who had raised five children. She had also been a newspaper columnist, publicist and radio writer so she knew how to write and how to promote herself.
Incredibly, she discovered a flair for stand-up jokes at school parent-teacher meetings and similar gatherings and decided to make comedy a career at the urging of her then-husband, Sherwood Diller. They divorced in 1965 and a second marriage to singer Warde Donovan ended 10 years later.
Diller slowly brought together the props, zany wardrobe and stage persona that would become her unique stage persona. One of her first comedy albums "Wet Toe In A Hot Socket" became a runaway success that scored right up there with Bob Newhart's "Button Down Mind."
Few comedians had a longer reign than Phyllis Diller. In show business they would say she had "legs." She continued to work right into the first decade of this century and as recently as last year she appeared on the TV daytime drama The Bold and The Beautiful.
Phyllis Diller followed a simple rule: She understood, catered to, loved and was guided by her audiences.
"I let them laugh with me, at me, which makes the audience very comfortable," she said. "I've learned everything from them. ... You're a comic and you're not a success until you hear laughter."