Whose Side Is This Guy REALLY On, Huh? 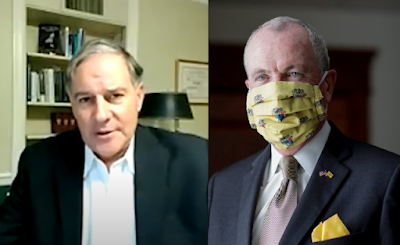 From our friends at Save Jersey, reprinted with permission.

Freshman Assemblyman and combat veteran Brian Bergen (R-25) is running for GOP Leader, Save Jerseyans; when he announced his intentions last week, Bergen made waves (the good kind) by declaring that the Republican caucus has become a collection of “happy captives.” He wants to turn the party into a real opposition movement to the Democrat majority.

The outgoing Assembly Leader (Jon Bramnick, R-21) is running for state senate this cycle which is is the reason why there’s an open position. He apparently wasn’t amused by Bergen’s appropriately tough criticism.

“I don’t mind if he wants to criticize my leadership. That’s his right. But to criticize the entire caucus, where there’s been many representatives who have fought really hard for their ideals, I think that’s definitely off base,” Bramnick told Politico on Thursday. “I think to say the entire caucus is like a bunch of hostages and captives is to insult all the Republican members of the Assembly.”

Sadly, while most refuse to go on record about it, a dozen or more members of the GOP caucus have complained to me over the years about the lack of leadership from the top. Whether it’s giving the Democrats a pass on tough votes, treating pro-Trump Republicans with more hostility than far-Left political opponents, staking out liberal positions on important issues, legitimizing an attorney general with no fealty to the Constitution, or stubbornly instisting upon “civility” virtue-signaling at the expense of developing a coherent battle plan, Bramnick is only a GOP leader at this point in the eyes of state media who like to give oxygen to Republicans who shit on other Republicans. There’s no leading going on. There hasn’t been for a long time.

There were 32 GOP Assemblymen when Bramnick succeeded Alex DeCroce in January 2012. There are 28 today and the map continues to shrink.

The straw that broke the camel’s back for many? Bramnick’s recent decision to host and then trumpet a cookout in his backyard with Phil Murphy attending as a celebrated guest. At a time when Republicans are trying to hold a power-drunk governor accountable for 8,000 nursing home deaths, the destruction of 1/3 of the state’s small business in 2020, masking young children, and a host of other outrageous offenses? It was a tone-deaf bad look to say the very least.Bramnick doesn’t want to be a Republican leader!

He wants to wear the pin, do his comedy routine, and boast about his close relationship with the Murphy Administration. It’s called “Trentonitis,” and it’s incurable once the infection takes hold.

I can’t tell you how many times I’ve responded to complaining caucus members by pointing out that, if they don’t like Bramnick’s lack of leadership, then they should grow a pair, step up and challenge him themselves. It obviously never happened. Now Bergen – who’s only been in Trenton since 2020, is seizing upon this opening to try to move the long-irrelevant Assembly GOP caucus towards… relevance. It’d be a welcome change!

Bergen isn’t uncontested, by the way; he’s one of four candidates seeking what may be one of the most thankless jobs in Trenton assuming, of course, the occupant actually attempts to do the job. I think it’d be a great idea to have an open and frank discussion about the direction of the NJGOP legislative caucus. It’s long overdue, and for what it’s worth, the important thing for the future isn’t ideological purity litmus tests. There’s room for disagreement on some stuff provided it doesn’t undermine the effort to develop a cohesive, unifying, pro-liberty message. What matters most is an unceasing committment to building a Republican majority, district-by-district.

The only people whose opinions are welcome going forward are Republicans who are all-in to defeat the radical Trenton Democrats. As the outgoing leader’s good buddy would say, “period, full stop.”

Jon Bramnick made his choice. Assembly Republicans are preparing for a new era. He needs to butt out of the process.