You can watch the fireworks over the Delaware this Saturday evening (June 27) from the deck of the Battleship New Jersey. And be sure of this: There is no better place from which to view this pyrotechnic spectacular.
But more on that in a moment.
We recently had a chance to tour the Battleship New Jersey (BB62) on the Camden waterfront and we had a great time.
BB62 was built at the Philadelphia Naval Shipyard, and launched December 7, 1942- just a year after the Pearl Harbor Attack brought America into WWII. 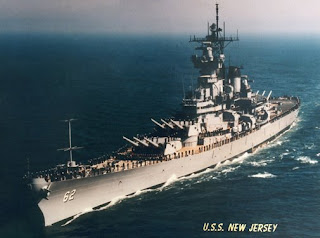 The USS New Jersey was actually the second ship to be called “New Jersey”, the first being BB16, a turn of the century (19th century) battleship.
The first Battleship New Jersey (BB-16) was a Virginia class pre-dreadnought that served from 1906 until she was sunk as a bombing target in 1922. She sailed with the Great White Fleet and served her country in World War I as a training vessel.
The current New Jersey was decommissioned for the last time on February 8,1991 at Bremerton, Washington where she resided until heading home to New Jersey.
Our own former Congressman Jim Saxton was the driving force behind the New Jersey's move back to its home in Camden.
On September 12, 1999 New Jersey began her final voyage home from Bremerton, where she had rested in mothballs for eight years. On November 11th, she arrived at the Philadelphia Naval Shipyard.
Since that time, she has been restored, opened and established as an educational museum and a tribute to the brave sailors who served on her during her long and distinguished career. The Battleship New Jersey opened as a Museum and Memorial in October 2001.
Now, back to the fireworks.
If you go to see the fireworks from the New Jersey you will enjoy face painting, the Philadelphia Zoo on Wheels, Interactive Gaming Experience, the Philly Phanatic, Sixers Dance Team and more! Plus food concessions, bar service and the best view of the fireworks over the Delaware River at dusk! Tickets are $10 for On-Deck, and $7 for On-Pier. Tickets can be purchased in advance via this battleship website or by calling 1-866-877-6262 ext. 107.
BTW: The Battleship New Jersey is America's most decorated battleship. She's a true national treasure!
Posted by Dan Cirucci at 6:36 AM