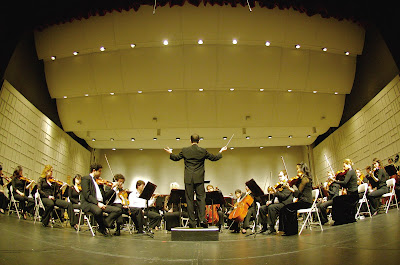 On Tuesday evening we attended a wonderful performance by Symphony in C in the new Nordstrom court of the Cherry Hill Mall.
Symphony in C, formerly The Haddonfield Symphony, is one of three professional training orchestras in the United States preparing musicians and conductors who are on the cusp of world-class careers through concert, educational outreach and professional development programs. The Haddonfield Symphony began in 1952 as a community orchestra allowing amateur musicians to pursue their love of music by performing for the Haddonfield and southern New Jersey community and made its debut performance in January 1954 under Music Director Guido Terranova.
Well, this symphony orchestra has moved so far forward since those early days. But one of the biggest changes came most recently.
In the fall of 2007, The Haddonfield Symphony became Symphony in C to signal its complete transformation from a community orchestra to the only professional training orchestra in the Mid-Atlantic that provides musical performance training and career development services for musicians pursuing a career as an orchestral musician. Symphony in C has been designated a Major Arts Institution by the New Jersey State Council on the Arts and strives to continue making artistic, educational, and economic impact on a regional, national and global scale.
Current Music Director Rossen Milanov who had previously served as Intern Assistant Conductor under Alan Gilbert was appointed in 2000. Milanov has led the orchestra in performances throughout southern New Jersey and in their debut at The Kimmel Center for the Performing Arts in Philadelphia, which led to broadcasts on WRTI’s Sunday Afternoon Concert Series, WHYY’s Sunday Showcase, and WQXR’s McGraw-Hill Young Artists Showcase.
In 2004, the Symphony was awarded the national MetLife Award for Community Engagement presented by the American Symphony Orchestra League in recognition of its educational outreach programs serving people with special needs.
The 2006 – 2007 season began a new era for The Symphony with the move of its entire concert series to the Gordon Theater at Rutgers – Camden Center for the Arts in Camden. The move has generated a strong new awareness for The Symphony throughout the region and has had the most significant artistic and organizational impact on the orchestra since its transformation from a community orchestra to a professional training orchestra in the early 1990’s.
The Symphony’s presence in the City of Camden affirms its commitment to participate in the cultural and economic redevelopment of Camden through the numerous performances and educational outreach programs it will continue to provide throughout the City.
After the concert a group of us gathered for dinner in the spectacular new Seasons 52 restaurant at the Mall and learned more about Symphony in C via a lovely new video.
You owe it to yourself to experience Symphony in C, a true tresure.
Find their complete 2009/10 lineup of performances by clicking here.
BTW: Our thanks to the Cherry Hill Mall, Symphony in C, Lisa Simon and the great people at the Simon Public Relations Group for making all this possible.