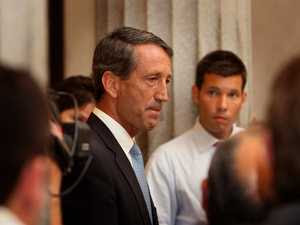 From Cliff LeBlan and John O'Connor at South Carolina's The State:
S.C. Gov. Mark Sanford admitted today that his secret trip to Argentina over the Father's Day weekend was to visit a woman he has been having an affair with for the past year.
In an emotional news conference, Sanford said his relationship with the woman in Argentina would not work, but would not say if it was over. He did not name the woman, but said he met her eight years ago, although their casual friendship evolved into a romantic relationship about a year ago.
“The bottom line is this: I have been unfaithful to my wife,” the two-term governor said before a mass of press in the State House outside the governor’s office. “Let me apologize to my wife Jenny and my four boys ... for letting them down.”
Asked directly if he and first lady Jenny Sanford are separated, Sanford said: “I don't know how you want to define that. I’m here and she's there. I guess in a formal sense we are not.”
Sanford acknowledged he misled his staff earlier this week when he led them to believe he was hiking the Appalachian Trail.
Sanford said he would resign as chairman of the Republican Governor’s Association — a platform he has used over the past few months to broadcast his opposition to President Barack Obama’s economic stimulus package and fueling speculation that Sanford was considering a 2012 run for president.
But Sanford did not respond when asked if he would resign as governor.
Sanford fought back tears several times during a 20 minute news conference, especially when he mentioned his marriage counselor and his long time personal and political friend Tom Davis, Sanford’s former chief of staff.
Sanford’s relationship with the woman in Argentina became more sexually charged about a year ago, but Sanford’s wife did not learn of the affair until about five month sago. The Sanfords have since been in counseling.
In his apology, Sanford acknowledged not only all South Carolinians, but people of faith, people in his own party as well as his family.
He denied he had ever had other extramarital affairs.
“I’ve spent the last five days of my life crying in Argentina,” Sanford said. “I am committed to trying to get my heart right.”
I love South Carolina and South Carolinians.
South Carolina is my adopted home state and I will be there again soon.
But I've never been a big fan of Governor Mark Sanford and that's why you've never seen me mention him on these pages.
I've never been very impressed with him.
I'm quite instinctive about people and there was just something about Sanford that didn't appeal to me. I look for authenticity in people and Sanford never seemed to "do it" for me.
I never took him seriously as a possible '12 presidential candidates.
So, I don't feel that this is any great loss; no loss at all, really.
When all is said and done; when other possible candidates fall away and the dust settles, one GOP leader will stand head and shoulders above the rest as we approach 2012.
His name is Mitt Romney. And I do feel very good about him.
Posted by Dan Cirucci at 4:33 PM

I wasn't a fan of Mitt Romney during the last election, but I'm warming up to the idea of him headling the next GOP ticket...

I was at a lunch where Mitt Romney was the main speaker. Very persuasive, especially in this economic climate. However I question his "realness." This was a very moderate governor of Massachusetts who then espoused a hard-line Republican agenda when the electorate changed from Massachusetts to national Republicans. Phony?? I'm not saying I wouldn't like him in '12. In fact, I would guarantee a vote for him from me. Right now we need someone who can understand the economic climate more than not-needed social programs and more and more spending. I just have that Dan Cirucci/Mark Sanford feeling right now.

I understand both comments.
And I thank you both for commenting.
A lot of people are warming to Romney and I feel that's a good thing.
Now, Romney must start to warm up in return. He needs to open up, be more human, more natural, more engaging and show a bit more spontaneity.
And, I think he'll do that.
Just remember: Time is on our (and his) side.