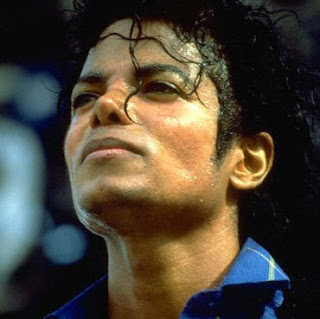 Michael Jackson was nearing his 51st birthday when he died today.
From the age of six until 36 he enjoyed a remarka
ble career.
He brought the music video into a whole new era. Many people feel that, for better or worse, there would be no MTV today without him. He was a huge talent and his talent transcended music. Above all, he was unique.
We don't always know or understand why certain entertainers become superstars; why they enter the Pantheon of their business.
Call it chemistry. Call it being kissed by the gods. Whatever it is, he had it.
Michael Jackson was a superstar.
I can't say that I was ever a Michael Jackson fan. For whatever reason, I never connected with him or his music.
But that doesn't matter. I was in the minority.
He was a dazzling entertainer who knew how to attract and hold an audience. He was iconic.
Sadly, the real Michael Jackson was, by all accounts a tortured soul.
As a child performer he was used and abused and he remained unformed, unfinished.
He never developed a true sense of who he really was or who he ought to be.
It seems his protective mechanisms clicked in at an early age and key aspects of development were halted.
I suspect that his apparent sexual contusion simply mirrored deeper, more harrowing conflicts. I'm not sure Freud himself could figure all this out.
One also gets the sense that Jackson was lonely, wounded, misguided and estranged from his own family members.
It's unlikely that we will know the whole Michael Jackson story now.
Because, almost as if Jackson had planned all this, he will now become part of popular mythology. And as a modern myth he may become bigger than ever but at the same time less and less real.
He now enters the realm of Rudolph Valentino, Marilyn Monroe, James Dean and Elvis Presley.
Now, any chance we had of really getting to know him slips away.
Maybe that's just as well. Maybe it isn't.
But that's the way it is.
Posted by Dan Cirucci at 8:18 PM

michael jackson was my favorite singer ever in the whole world.

Michael Jackson was a vulture who preyed on little children and used his money to beat the charges. He had a ferris wheel in his god damn yard. I'm already tired of seeing him on the television.

Well, he DID trigger strong feelings on either side, that's for sure.