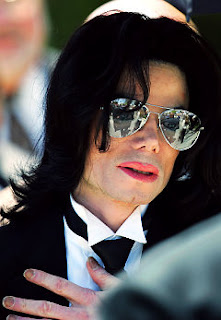 By all accounts Michael Jackson had a secret longing, a secret wish.
Used and abused as a child; worked relentlessly from an early age and overwhelmed with responsibilities that he did not recognize and/or could not handle, he squandered vast riches and even endured creditors' dunning and a long, messy child sex scandal in a misguided search for the one thing he could not find: Love.
Jackson couldn't find love because he didn't know what it was.
He had no point of reference. When it came to love, he had no model, no clue.
He confused love with the adulation of the masses. But that only meant harder work, more performances and an empty feeling when it was all over.
Judy Garland (also a child star) was reportedly deeply conflicted by the adulation of her fans and their constant demands for additional encores. To paraphrase Judy (from a number of bios) "It doesn't matter how much I perform, how much I sing or how much I give in a performance. They always want more -- more, more. I hate them!"
She supposedly hated her fans because ultimately they could not give her what she needed most.
The crowds, the adulation, the faux worship -- these do not bring love.
The most rabid fans are takers who can never be satisfied. Never.
So, deeply in debt (a fate that also plagued Judy) Michael became a lost, lonely, twisted, reclusive figure who drifted from city to city and country to country; who refused to eat; who abused prescription drugs.
Today's New York Daily News reports:
The former nanny of Michael Jackson's kids painted a picture of the faded singer as a delusional nomad hopelessly addicted to prescription drugs.
"I had to pump his stomach many times. He always mixed so much of it," Grace Rwaramba, 42, told London's Sunday Times. "There was one period that it was so bad that I didn't let the children see him. . . . He always ate too little and mixed too much."
Rwaramba said she once became so concerned she reached out to Jackson's mother and sister to attempt an "intervention," only to have the pop star accuse her of betraying him.
"He didn't want to listen," Rwaramba, who worked for Jackson for more than a decade before leaving last December, told the paper.
Rwaramba said Jackson shuttled from country to country, staying in one hotel after another. At times, he was so penniless, Rwaramba said, she had to use her own credit card to purchase things like balloons for his children's birthday.
Posted by Dan Cirucci at 2:54 PM

I thank you for the inquiry and for your attentiveness.
The Judy quote is paraphrased from a variety of sources.
Just to be totally true to this I've altered the post somewhat.
But, if you read Get Happy: The Life of Judy Garland by Gerald Clarke of the big, big bio Judy, by Gerold Frank you will learn that Judy Garland was hoplessly conflcted about the adulation of her ravenous fans and what all "love" really meant.
As fans begged for more and more encores at her concerts Judy reportedly would stand in the wings shifting her feet and muttering
"F - - K 'em!, "F - - K, em!"
She came to hate their insatiable appetite for more and more.
She knew she could not satisfy them.

I think the paraphrasing has perhaps too creatively focused on the negative rather than the entire picture. Garland
was an entertainer; that was her job, her income. So, true, one may assume there could've been at times a degree of
conflict, as anyone who has held a job sometimes feels put upon by a boss,manager,employer,corporation, whatever. Why should not Garland have her moments of weariness as well? But, simply conjecture. In the big picture Garland spoke often publicly (and yes, I do stress publicly) of her appreciation for her audiences. An "actual" quote from Garland in Shana Alexander's article in 1961 " People en masse have always been wonderful to me. I truly have a great love for an audience" The "fxxx" mention is from a description of Garland pumping herself up as part of a "ritual" she performed before popping out on stage ... one would think perhaps akin to the old technique of imagining the audience as nude so as to put off stage fright. My own opinion: she hated loneliness, she didn't hate audiences. Again, conjecture. But as always there are 2 sides to the coin.