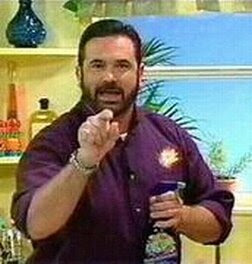 From Fox News:
Television pitchman Billy Mays — who built his fame by appearing on commercials and infomercials promoting household products and gadgets — died Sunday, FOX News confirms.
Mays was found unresponsive by his wife inside his Tampa, Fla., home at 7:45 a.m. on Sunday, according to the Tampa Police Department.
Police said there were no signs of forced entry to May's residence and foul play is not suspected. Authorities said an autopsy should be complete by Monday afternoon.
Mays, 50, was on board a US Airways flight that blew out its front tires as it landed at a Tampa airport on Saturday, MyFOXTampa.com reported.
US Airways spokesman Jim Olson said that none of the 138 passengers and five crew members were injured in the incident, but several passengers reported having bumps and bruises, according to the station.
Authorities have not said whether Mays' death was related to the incident.
"Although Billy lived a public life, we don't anticipate making any public statements over the next couple of days. Our family asks that you respect our privacy during these difficult times," Mays wife, Deborah, said in a statement on Sunday.
Posted by Dan Cirucci at 12:15 PM