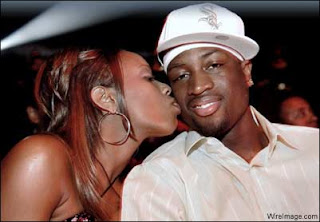 He has the biggest microphone on the planet and President Obama used it Friday to promote fatherhood.
He was joined at the White House by the likes of NBA stars Dwyane Wade and Alonzo Mourning.
But wait, let me get this straight.
Dwayne Wade is a model father?
Google Dwayne Wade and you'll find tons of items about his messy, messy divorce and his links to a variety of other women.
Here's what the Miami Herald reported about Wade in January:
Miami Heat all star guard Dwyane Wade’s divorce from Siohvaughn, his high school sweetheart is getting ugly.
Dwyane, 27 and Siohvaughn, 27, have two boys, Zaire, a first-grader who will be 7 next month, and Zion, 1. Dwyane petitioned for the divorce last May in Cook County, Ill. But his wife has now gone on the offensive and in legal papers, she alleges he abandoned his children, committed adultery, and infected her with an unspecified sexually transmitted disease.
She wants the names of ”all of his sexual partners” during their six-year marriage. Dwyane, named a “Father of the Year” in 2007 by the National Father’s Day Committee, has gone “months” without seeing his boys, Siohvaughn says.
His “failure to spend time with them” has resulted in the children at times being afraid of him; in fact, Zion . . . does not recognize or know Dwyane.”
She wants sole custody, and support. She also says she has suffered ”grievous physical, emotional and mental injury” from the STD, diagnosed in the fall of ‘07. (The infection is not HIV or a ”killer thing,” sources say.)
Dwyane and his ”paramour or paramours” are liable, she alleges.Dwayne who has starred with Charles Barkley in those T-Mobile Fav5 commercials, has been romantically linked to actress Gabrielle Union, 36, once married to former Jacksonville Jaguar Chris Howard, acccording to the Miami Herald.
Message to Obama: Couldn't you find a better "Father of the Year" than this?
Posted by Dan Cirucci at 1:21 PM