Diana Krall At The Mann 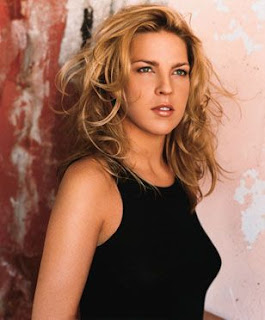 Diana Krall is touring this summer on her "Quiet Nights" tour (also the name of her new album and we got to catch her show last week at the beautiful Mann Center for the Performing Arts in Philadelphia.
Diana Krall is an extraordinary jazz pianist and vocalist who reinterprets classics with a style and approach all her own. She's really a luminescent song stylist.
At times she might remind you of the great Peggy Lee (she did several Peggy Lee numbers at her concert) and at times she might remind you of Julie London (she also did a Julie London number) and on her new album she channels Getz, Gilberto and Jobim.
But always, always, she's all Diana Krall: innovative, engaging, sensual, playful and remarkably easy on the ears and eyes.
We had a perfect night at the Mann for Krall. The weather calmed down for awhile and the sky was clear with a nice cool breeze. The crowd was large and very appreciative and Krall played well to her audience with the accent always on the music.
Here's another nice thing about this beguiling entertainer: As much as Krall and he group improvised with the standards she interpreted, the jazz improvs never strayed so far that you couldn't still hear the melody of the song. I liked that.
The Mann has a splendid lineup this summer: popular, classical, rock, blues -- whatever you're looking for.
So, check out their schedule and head on over to the Mann Center.
You'll have a great time!
Posted by Dan Cirucci at 1:52 PM