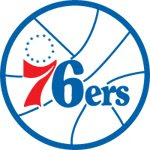 The Philadelphia 76ers have officially changed their primary logo and color scheme with a return to the traditional “76ers basketball” logo and the red, white and blue color scheme.
The basketball logo was last used during the 1996-97 season and consists of a color scheme that was originally established in 1963 and used during the Sixers’ two championship seasons in 1966-67 and 1982-83.
"By bringing back the old Sixers logo, we are connecting the past with the future," said Comcast-Spectacor Chairman Ed Snider. "This logo evokes memories of some of this franchise's proudest moments. We also made this change because we understood how much this logo means to our fans, this franchise and to our city. The fans had a big input on this decision. We're excited and we want the entire City of Philadelphia to be excited for Sixers basketball."
"The 76ers logo is one of the more iconic in all of professional sports and we are sure fans will appreciate the Sixers returning to their core colors and ball icon," said Christopher Arena, NBA Vice President Apparel, Sporting Goods & Basketball Partnerships.
This is the first major logo change for the Sixers since the 1997-98 season, when the logo was modernized to incorporate black, silver and gold into a stylized “76ers” wordmark that featured a predominant red and silver star to the left and a gold ball with blue stripes below. From 1963 through 1997, the Sixers' identity revolved around a “76” in red and royal blue and a star configuration above the number seven, which was an identity that defined the team through two NBA Championships. The 76 and stars were utilized within a bell symbol from 1963-77 and then the “ers” was added to the "76" and contained in a ball.
The ball form of the logo is what is most recognized and most associated with the “Fo’, Fi’, Fo’” championship team of 82-83, one of the greatest teams in NBA history. The only enhancement with the new logo will be a rectangular “court” shaped enclosure around the ball logo with the city name “PHILADELPHIA” grounded along the bottom and silver accent shaping the entire perimeter.
The Sixers will introduce a new secondary logo and wordmark at a later date. Additionally, the team will unveil a new court design and
Posted by Dan Cirucci at 6:02 AM