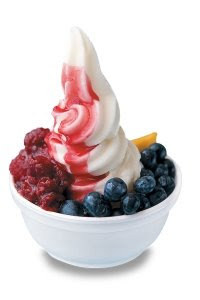 You can get free Sprinkles frozen yogurt all day Friday, June 24 at the new Sprinkles at Garden State Park on Route 70 at Haddonfield Road in the shopping plaza just behind Wegman's.
The California frozen yogurt craze based on low-fat, probiotic fresh-made tart flavors and a self-serve concept and now it is is coming to the Philadelphia region.
Twenty-something siblings Ryan (age 27) and Matt (age 24) Mealey have started Sprinkles, which will open four stores in the region over the next few months, starting with this first store opening in Cherry Hill followed by stores on the Penn campus, West Chester, and Malvern .
Each store's opening will draw hundreds of customers with free frozen yogurt all day.
Hours will be 11am-9om weekdays and 11am-10pm weekends.
The new "fro-yo 2.0" craze started in California with Pinkberry in 2005, followed by Red Mango, Kiwiberri, Berri Good, IceBerry, and others.
Across California, these new frozen yogurt shops have replaced most ice cream stores. YogurtLand and others opened the first self-serve frozen yogurt shops in LA starting less than two years ago; now most frozen yogurt shops are self-serve. The trend has since spread throughout the West Coast and also recently to New York.
Food bloggers and national magazines such as "Travel & Leisure" magazine have charted this trend, similar to the coffee craze of the last decade.
At Sprinkles, 90-95% of the flavors are fat-free, with only 10 calories per ounce.
Healthy toppings such as fresh fruit and nuts have made this a popular replacement for breakfast, lunch or even dinner -- it's not just for dessert.
The difference is that this new generation of fro-yo has active yogurt cultures (adding tartness) with probiotics. Independent research has shown that eating probiotic yogurt can help improve your immune system and increase your ability to absorb calcium. Due to its healthful qualities and low-fat content, it has become an alternative late breakfast or lunch option in California.
"What we have found is that customers want to be empowered through self-service," said Ryan. "At Sprinkles, you choose from 2 different size cups, or a homemade waffle bowl, fill your cup with as many flavors of frozen yogurt as you like, add as many toppings as you like, then simply weigh and pay." The cost is 45 cents per ounce.
Sprinkles offers 16 flavors of premium frozen yogurt including Original Tart (which started it all), Pure Vanilla, Classic Cappucino, Green Tea Tart, Irish Mist, Banana-rama, New York Cheesecake, Snickerdoodle Dandy, Berry-licious Sorbet, Krazy Kahlua, Peppermint Stick, Pistachio, and Rootbeer Float. The "toppings bar" will have 35 choices available at all times, including fresh fruit (not frozen), natural granola, cereal, and candy.
The entrepreneurial siblings came up with the idea for Sprinkles while visiting relatives in Los Angeles last year. Ryan (female) is 27 and a 2004 graduate of Villanova. Matt just turned 24; graduated Penn State in 2007 with an BMA from Temple this year. The name Sprinkles was the winner of a family-and-friends voting competition. Each of the colorfully vibrant stores will have limited indoor seating.
Posted by Dan Cirucci at 2:42 PM