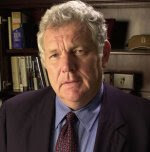 Bill Bennett's Morning In America is one of the finest talk shows on the radio. It's lively, informative, stimulating conversation conducted in a civilized manner with interesting guests, pertinent topics, and attentive callers with opinions that give you lots to think about.

Bennett's show is heard in Philadelphia from 6 till 9 every morning on WNTP newstalk 990 on the AM dial. It is also heard throughout the United States and on Sirius satellite Channel 144.
This is not a "shout show." Bennett never raises his voice. And this is not a boast-fest or an ego celebration. Though Bennett is an extremely accomplished person, he doesn't huckster himself, his books, his ideas or the show. Rather, his listens - really listens - to callers and guests and responds with insight and clarity. All ideas are entertained and everyone is treated respectfully.
Dr. William J. Bennett is a native of Brooklyn, New York who studied philosophy at Williams College (B.A.) and the University of Texas (Ph.D.) and earned a law degree from Harvard. He is the Washington Fellow of the Claremont Institute, and a CNN Contributor.
During the 1980s, Dr. Bennett emerged as one of the nation's most prominent political figures. He served as President Reagan's chairman of the National Endowment for the Humanities (1981-1985) and Secretary of Education (1985-1988), and President Bush's "drug czar" (1989-1990).
Dr. Bennett has recently completed a two-volume history of the United States, entitled: "America: The Last Best Hope," Volumes 1 & 2--both New York Times Best-sellers.Dr. Bennett has written for America's leading newspapers and magazines and appeared on the nation's most influential television shows. He has also written and edited 16 books, two of which -- The Book of Virtues and The Children's Book of Virtues -- rank among the most successful of the past decade. The Book of Virtues has been made into an animated series that aired on PBS in the United States and Great Britain and has been seen in over 65 countries.
This man, his writings and his program are worth your attention!
Posted by Dan Cirucci at 8:42 AM